SGA debates use of faculty-staff committees

The SGA meeting Monday was dominated by a discussion concerning the placement of senators on Faculty Senate committees.
The discussion ended in a small debate between the senators and the executive board.
Demario Jones, SGA president, was concerned about the absence of senators on the faculty staff committees. Senators are supposed to represent the student body when university issues are discussed by the faculty- staff committees.
Senators have signed up for the committees, but the list has not been approved by the full senate. In addition, there are some committees that have not been filled at all—such as Athletics, Educational Policies (which passed the five limit with-drawl policy), Environmental Issues, Student Services and Technology.
Since the faculty has been very adamant about having student representation on the committees, they have reached out to SGA for interested senators.
The Faculty Senate has requested at least two senators to serve on each committee for future meetings.
The senators appointed to each committee will not have a vote, but his or her opinion will be valuable and taken into consideration for decisions made by each committee, Jones said.
Jones made sure that he expressed how important it was that every committee had representation and he encouraged Senators to sign up for a committee of his or her particular interest.
“This is one of the things I platformed and ran on, and the fact that we have been discussing it for a month,”Jones said. “It’s pretty bad to have Senators critique it so heavily when it’s such an important issue.”
Even though Jones stressed the importance of having senators serve on the committees, some senators still had concerns about the signing-up process and whether or not the commitment to that committee was long-term.
Though the senators had valid reasons for why they debated so heavily with Jones on the issue, no one was willing to comment or explain their lack of initiative following the meeting.
Jones made it clear that he is willing to work with the senator’s schedule and make necessary preparations for a substitute in the senator’s absence if necessary for that scheduled Faculty Senate meeting.
Eventually, a motion was made for the senate to vote for the approval of the list. The motion needed a two-thirds vote from the senate, which it received.
In other business, SGA also announced plans to be involved in the Homecoming’s festivities scheduled for next week. Secretary Avraye Henry has decided to run for Homecoming Queen on behalf of SGA.
The senate also voted two senators, Ryan Brown, who previously served during spring semester, and David Lathem into the organization.
SGA will return again next Monday for its regular scheduled meeting at 8 p.m. in the Student Union.  Anyone interested in being a senator can get more information under Student Government Association on VSU’s homepage. 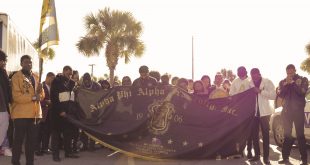