For this past fall break many of you probably attended the great college institution–the bar. When I say “bar” I mean drinking establishment and when I say drinking establishment I mean “that rocking awesome place where you met that girl that puked on your shoes.” So, if you are a freshman, then the whole Remerton bar strip is a new and exciting place where you meet people and talk about really deep interesting things. For example I overheard a conversation that started like this:

Guy 2: Put it back in your pants or I’m calling the cops! (Pulls out phone and starts dialing)

That wasn’t the first time I had seen something like that happen, hell I definitely can say I have done worst. The real problem isn’t people getting drunk and pissing in public, the problem is that the only thing to do in Valdosta IS to get drunk and pee in public. I’ve come to the conclusion that the bar scene around VSU is a clone copy of each other. Bar number 1 is just like bar number 2 except the name is different. The bars don’t differentiate or make an identity for themselves. All the bars play the same boring, popular music and you see the same type of people at these bars. Flat billed hats, popped collars, boat shoes, and peace symbols on everything from earrings to tattoos. The students out there must have specific tastes in music other than whatever is on the radio or fed to them intravenously from MTV.

I want a bar that has a techno or house night and they actually play house or techno. I want a bar to have a band come and play real metal melting the faces of the sorority girls. I want to stop seeing the same jam bands playing their original songs instead a cover of “Stranglehold” by Ted Nugent. I want each bar to pick a certain theme and stick with it. If you call yourself an Irish pub, then damn it you better have The Dubliners playing “Rocky Road to Dublin” at least once an hour and the whole crowd better be singing it. I’m tired of the mixing of too many music styles. Metalheads want to listen to Slayer and only Slayer when he is drinking cheap bear. The hippies want to hear Grateful Dead till Gerry is raised from the dead with their hula hooping. The Emo kids want to cry to Fallout Boy till their mascara is gone. All I’m saying is let’s stop being all the same and demand an eclectic mix of bars that would really make our weekends something of legend rather than another bland, sad, excuse for fun. Especially after everyone gets tired of peeing in public.

Previous Poissons de Chants on display
Next Local Politics, why should it matter? 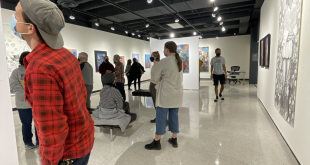 The act of canceling a celebrity, politician or musician has become a staple for internet ...