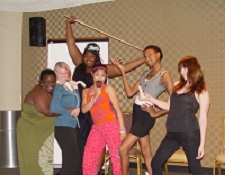 Abuse and exploitation of women happens around the world, and the Vagina Monologues was created to raise funds and awareness for this rising problem.

The Vagina Monologues is a production written by playwright Eve Ensler.

Ensler interviewed over 200 women of all ages about their memories and experiences with their own sexuality.

“Each year is a different spotlight,” Alvinette Patterson, director and alumna, said. “For this year, it’s Haiti.”

The theme of Haitian women and the abuse they endure was also last year’s theme.

However, due to the lack of resolve in Haiti, the theme has remained in hopes that more awareness will bring peace to the women who have suffered.

And however crude the subject matter may appear, there is an obvious message to the Vagina Monologues: the need for healing.

Women in Haiti, even female children, experience some of the worst sexual violence from rape to complete genital mutilation.

Through humor and tears, the Women and Gender Studies department plans to tell the stories of several women who conquered their own sexuality, or have experienced the worst of sexual violence.

“People don’t really realize what’s going on [in Haiti], and I think after they see this they’ll question it a bit more and educate themselves about what’s happening,” Samantha Bryant, director and alumna, said.

The cast and crew of the Vagina Monologues want a chance to be open and honest about women’s sexuality, and to be able to spread awareness for the issues others may face.

“When you start talking about vaginas anywhere, you always get questions,” Patterson said. “Or they think it’s a nasty word. Or we’re being vulgar.”

The cast and crew aim to break those barriers.

Many members have been involved in the Vagina Monologues for years, and even newer cast members are excited to participate again next year.

“I volunteered last year, but this is my first year in it,” TaNay Hamilton,  a sophomore mass media major, said. “It made me more accepting of different kinds of people. It brings you together.”

The Vagina Monologues is a powerful production, but the name still makes the student body apprehensive to  attend.

“We get a lot of people that come, that really enjoy it […] then we also get people who are like, ‘Vagina Monologues? What’s that? That’s gross! Why would I go to a play about vaginas?’” Bryant said. “They know us because we’re the t-shirt people. The ‘I heart Vaginas’ t-shirts!”

The Women’s and Gender Studies department is set to perform the Vagina Monologues Thursday, Friday and Saturday  at 7 p.m. in Jennett Lecture Hall.

Tickets for the event are $5 with a student ID and $10 for general admission.

“If we can get just one person—because we have some students, from last year, in the cast—just one person interested in the Vagina Monologues, we’ve gotten more than we could hope for,” Bryant said.