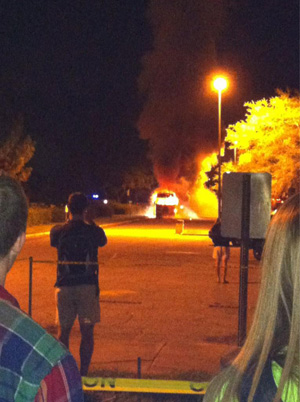 No one was hurt when a VSU shuttle bus caught on fire in a parking lot at North Campus at 8:45 p.m. on Tuesday.

The driver smelled smoke and pulled over to investigate, safely evacuating the two or three passengers.

As the students evacuated, the smoke began to intensify, prompting the driver to call police, according to Thressea Boyd, assistant to the president for communications.
�
Police and fire officials were dispatched to the scene at 9:04 p.m.
�
The bus was totaled and towed, but the cause of the fire is still under investigation by the Valdosta fire chief.

Previous VSU gets “Casual for a Cause”
Next Random musings: RaceCam and in-race reporters