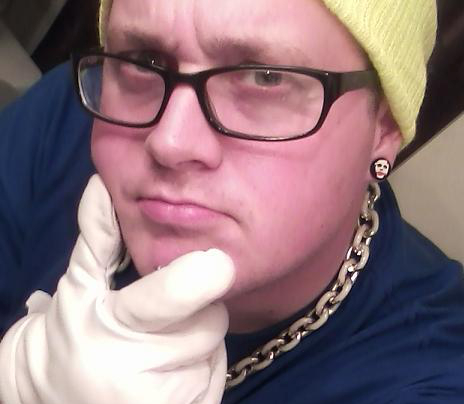 “I’ve always been animated,” he said. “I’ve always been trying to be a comedian. Any time I hang with a group of people, I try to make them laugh. It’s just in me. Even as a kid, I always used to try to try to entertain people at a restaurant and my parents got all embarrassed. I used to get up on the table and do weird performances. I’ve always had a weird sense of humor. So I took it all together and thought about it. I was like, ‘I’m pretty much like a cartoon anyway.'”That’s right, he’s a cartoon character. Maybe not literally, but when Cloroks takes the stage, he delves into his imagination to pull out this crazy, animated persona reminiscent of a kooky cartoon character.

Like becoming an entertainer, his rap name just makes sense.

“My rap name came to me one day and just seemed to stick,” he said. “I’m a white rapper and the bleach thing fit that. Also Clorox is a household name and I want to be a household name in this genre one day.”

His art is rap, but not the kind you hear on mainstream radio stations.

“I’m pretty much just out there, especially when it comes to rap,’” he said.

“It’s pretty much zany antics of a cartoon character set over an 808 beat,” he said.

Cloroks has always been aware that his special blend of music was a little bizarre.

“‘I would write these raps and I’d to go to these studios in Albany, and it was like hood studios, and I’d go and record it and there’s all these other artists in there who were recording street music about selling drugs and all this stuff and I’m over here writing stuff about, like, loving big girls and all this weird stuff, throwing candy at people…” he said. “I felt like I was kind of an outcast anyway.”

The Pale Homie hasn’t always been into this kind of music, though.

“I didn’t even listen to rap until tenth grade,” he explained. “I didn’t listen to it at all. I was one of those people who were like, ‘You can’t understand anything rap’s saying.’ I don’t know why. It probably comes from South Georgia; I was living in Adel at the time. I did listen to some old-school stuff like Sir Mix-A-Lot when I was a kid.”

Cloroks wouldn’t disclose his given name because “a true cartoon rap villain never gives away his true identity,” but he did say that he attended Cook High School in Adel, class of 2001.

It was in high school that he met Jake Walsh and Ben Stubbs. The two currently work at the Brass Quill Gallery on Ashley Street, but in high school they were members of the rock band Serial Karpenz. So was Cloroks.

“Cloroks was always rapping,” Stubbs said. “He was rapping before we knew him. We started a band with him. We recorded some rap songs and then [Jake and I] realized we couldn’t rap so we formed a full band. Then [Cloroks] realized he couldn’t sing so he quit the band and he’s been rapping ever since.”

According to Stubbs, Cloroks performed under various aliases before taking up his current stage name. These previous stage names include MC Morbid and Deep South Prophet.

What got Cloroks into rap was seeing Field Mob, a group from his home town of Albany, make it big.

“That blew me away,” he said. “I was like ‘Wow!’ I started listening to their music, and they were animated, too. They were South Georgia rappers that were animated—crazy punch lines, real witty lyrics. So, that’s kinda what got me into it.”

It was about 2004 when Cloroks got serious about his solo career and got even deeper into it in 2006. He was touring across the country by 2010.

Cloroks draws inspiration from all types of music, but is mainly inspired by artists like Busta Rhymes, Field Mob, Tech N9ne and Insane Clown Posse.

Cloroks aims to put on a show that’s fun for everyone, but he definitely has found a niche audience. But no matter how big or small the audience, the shows are all about the fans for Cloroks.

“I try to give people a show,” he said. “It’s boring to watch a rapper on stage with a shoulder towel walk back and forth. If you’re throwing blow up dolls off the stage into the crowd and stuff like that, it’s money well spent.”

The next chance to see this villain in action is September 14 at Flip Flops in Remerton where Cloroks will be opening for Bubba Sparxxx. The doors open at 9 p.m. with DJ Karlo spinning until the show starts, which should be around 10 or 11 p.m, according to Cloroks.

Advance tickets are $7, but getting tickets at the door will make a much deeper dent in your wallet. Cloroks says that after the party gets started ticket prices are based on the venue’s capacity. That is, the more people inside when you get there, the more tickets will cost.

Opening for Bubba Sparxxx is kind of a dream come true for this South Georgia rapper.

“I really looked up to him in high school,” Cloroks said. “Not only was he a white rapper that came out on the scenes from South Georgia, he was a husky white rapper, so I could relate to him on an extra level.”

He added, “I feel nothing but respect for that guy. I’m super-pumped about the whole show. It’s an honor to be opening for him.”

“I’ll have some new stuff, some old stuff, and then I’ll have the songs everybody likes to hear,” he said. “Every artist has certain songs that you feel like if you go to do a show and don’t do those songs then people are gonna get mad. But then again, the way it works, with Remerton it’s all college students so every time college cycles out there’s a new crowd. One time you go in to do a show and you know everybody; the next time it’s all new people. But what I do is really an underground, niche market kind of thing so it’s probably going to be pretty new to a lot of them.”

After the show, Cloroks is going back to work on his newest project, a follow up CD to his 2010 mixtape, “The Adventures of Eddie Van Pale’n.”

“Now what I’m doing is dropping a CD called ‘More Adventures of Eddie Van Pale’n,’ which is a spinoff of my old one, and basically what it is is I’m getting back to my cartoony character.”

“It’s a persona,” he explained. “It’s not really who I am. Cloroks thinks he’s a villain, like a cartoon villain.”

“The movie ‘Despicable Me’ is a big inspiration on this next CD I’m working on,” he said.

While this new mixtape shows Cloroks is returning to his old ways, it also shows a new side.

“It’s a lot less profanity and stuff like that,” he said. “There’s some in there; I’m just trying to scale back on the blatant negative message… I can be creative and be the persona of a character without being overtly offensive.”

In second current project, Cloroks is working with another big name on the local music scene. He and Jimmy HenneC are working on a full album that will drop sometime in September.

“I’m Back,” the first single off of “MAOEVP” dropped on September 10 and is available at http://cloroks.bandcamp.com/. The release date for the full CD has not yet been set.

For the latest news, check out http://www.facebook.com/Cloroks. For booking information, contact cloroks@gmail.com.