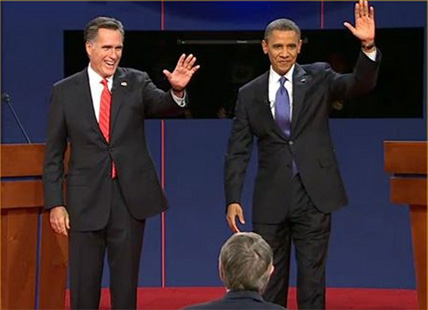 Mitt Romney needed a strong performance, and his showing during Wednesday night’s debate with President Obama was exactly that: strong.

Those that watched the debate tended to agree, too. 67% of those polled in a CNN poll right after believed that Romney was the victor over Obama, and with good reason. The Governor set the tone very early, detailing his plan to get the nation back on track, telling stories of those that he has met on the campaign trail, those that have fallen on hard times.

Romney made it very clear that this plan would be different from the President’s.

“Now, I’m concerned that the path that we’re on has just been unsuccessful,” Romney said. “The President has a view very similar to the view he had when he ran four years ago: that a bigger government, spending more, taxing more, regulating more, if you will, trickle-down government, would work.

“That’s not the right answer for America.”

This was exactly the point that Romney needed to hit, and he hit it, not seven minutes into the debate.

“Governor Romney’s central economic plan calls for a $5 trillion tax cut, on top of the extension of the Bush tax cuts, so that’s another trillion dollars, and $2 trillion in additional military spending that the military hasn’t asked for,” Obama said. “That’s $8 trillion. How we pay for that, reduce the deficit, and make the investments that we need to make without dumping those costs onto middle-class Americans, I think, is one of the central questions of this campaign.”

“First of all, I don’t have a $5 trillion tax cut, I don’t have a tax cut of the scale you’re talking about,” Romney said in response. “My view is that we ought to provide tax relief to people in the middle class.”

During the debate, however, Romney might have inadvertently given Obama – and his supporters – a battle cry about a third of the way through the debate.

“I’m going stop the subsidy to PBS,” Romney said, before explaining that yes, he did like PBS, and the moderator of the debate, Jim Lehrer, who has hosted PBS’s “NewsHour” since 1975.

“I like Big Bird!” Romney also added, which stirred up one hell of a sensation on the internet, and particularly on Twitter, where “Big Bird” trended for the rest of the debate, and for some time after, as internet users reported annoyance at what they had just heard.

As for Lehrer, the big loser in the debate might have been him. This was his 12th time moderating a Presidential debate, but it appears as if it might be his last. It appeared as if he had literally no control over the debate, allowing both Romney and Obama to talk over him, interrupt him (and each other), and show no regard for the ground rules that had been set.

Simply put, Lehrer’s milquetoast style was not what the debate needed, regardless of who came out on top.

As for how the polls will look, expect Romney to surge somewhat. The debate was precisely what the doctor ordered, and this race should get a little closer. Will it be close enough for him to overtake the President? Time will tell, but that time is almost running out.