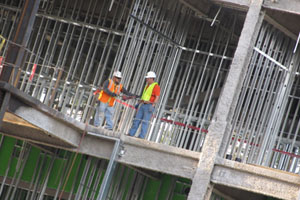 The Health Sciences and Business Administration building is being erected in the area that was formerly the North Campus overflow parking lot.

The construction fencing has blocked off the entirety of the lot rendering it inaccessible to students and faculty.

Ground was broken on the new building on Oct. 14, 2012, and the frame of the structure has already risen to form an outline of the building to come.

The project, estimated at $32 million, will create a building approximately 140,000 square feet.

The HSBA building, which is expected to be completed in January of 2014, will house several of the University’s science programs including nursing, Communication Sciences and Disorders, Athletic Training, Exercise Physiology, Social Work and Health Care Administration.

The building will consolidate the programs, which are currently located in five different buildings around campus.

According to a VSU press release, the project offers several advantages:

“The goal is to have functional academic and administrative spaces for programs in the College of Business, College of Nursing, Communication Science and Disorders and Sports Medicine and Kinesiology,” Dr. Victoria Douglass, University architect, said.

The administration has big plans for the future of the building. Dr. William McKinney, VSU president, referred to the building in a University press release as the future “cornerstone of Valdosta State’s health professions programs.”

Langdale Hall is also undergoing some minor work in an ongoing effort to give the 44-year-old building a facelift.

“We are doing phase III, or the B-wing of Langdale.” said Tom Hardy, director of housing and residence life. “This will match the previous two renovations: new bathrooms, new furnishings, new flooring, repainting, and more. This phase will also enhance existing staff offices and the [Residence Hall Director’s] apartment.”

Also on the schedule for this year is maintenance to the Fine Arts Building, College of Education and the Continuing Education Building. The maintenance will include renovations to the elevators and restrooms.

Renovations are also scheduled for the P.E. Complex on Sustella Avenue.

“Starting summer 2012 work began on replacing the [Heating Ventilation and Air Conditioning] system in the P.E. Complex,” Thressea Boyd, VSU’s director of communications, said. “In addition, a new chiller system was installed as part of the HVAC work.

“The former chiller and system was original to the building and more than 30 years old.  Currently, work is being completed on a two-story addition to the P.E. Complex that will provide men and women’s bathrooms on the second floor, [and] extend the concession area.  This work is scheduled to be completed by mid to late February.”

Douglass declined to comment on the renovations being done at the P.E. complex, saying that she had no knowledge of any construction at the building.

The construction of the HSBA building is being handled by the Atlanta and Nashville offices of KBR building group.

“We are looking forward to helping VSU realize the dream of three university presidents by delivering this new facility,” Jay Porter, project executive, said in an October 2012 KBR press release. “We are particularly proud of the fact that our subcontracting plan includes local, small and diverse subcontractors and suppliers, and look forward to a safe successful project.”