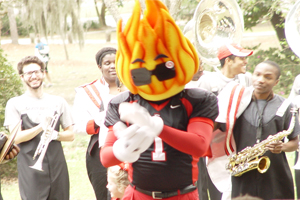 Despite the presence of strong winds and immense cloud cover, the highly-anticipated Parade of Champions took place Wednesday evening.

VSU, Lowndes County and the city of Valdosta came together to honor the Division II National Championship teams from the past year.

Led by a presentation of colors, as well as Mayor of Valdosta John Gayle and VSU president William J. McKinney, the championship motorcades made their way down from Mathis City Auditorium.

Flanked by the Valdosta State Band, cheerleading squad, and the Red Hots Dance Team, the teams gathered at Drexel Park near VSU’s main campus for a ceremony in their honor.

After an opening prayer and a greeting from VSU President William J. McKinney, Head Tennis Coach John Hansen addressed the sea of red and black.

Hansen, a 12-time Gulf South Conference Coach of the Year, fired up the passionate crowd by inciting a spirited chant of “Gooooo BLAZERS!”

In the past 12 years no school in Division II has made more appearances in the men’s tennis national championship than VSU with five (winning two).

“It’s unbelievable, there are a lot of schools, especially in division II, and a lot of communities that would not do something like this,” head tennis coach John Hansen said. “You can’t get any higher than the National

Championship and when you accomplish that it’s really something special. It’s great that we can give back to the community.”

After Hansen warmed the crowd, VSU Head Softball Coach Thomas Macera took the podium to express his thanks and congratulations to the teams being honored at the ceremony.

“This is a great honor for the university,” Macera said. “It was great for our girls and the coaching staff. I would love to do [the parade] again next year.”

The women’s 2012 softball team was not only the first women’s team in school history to bring home a title, but they were also the first softball team from the Gulf South Conference to do so.

“We’ve always said how great Valdosta supports VSU athletics, our fans here are unbelievable,” Macera said. “It means a lot to me being the first women’s team in school history and the first from the GSC so it definitely adds a bit to it.”

Following Macera, VSU Head Football Coach David Dean was cheered loudly by the Blazer faithful as he approached the podium.

“I was in Atlanta this week recruiting,” Dean said. “I met with several coaches and told them I had to get back for the parade.”

“People asked me why it was in the middle of the week and standing here now, I can tell them that this is what Titletown is all about.”

Since this was the first time in school history that more than one team in a calendar year took home the championship, the parade represented a special day for Valdosta State athletics

At the conclusion of the ceremony, Valdosta Mayor John Gayle and Lowndes County Board of Commissioners Chairman Bill Slaughter Jr. issued the joint proclamation. Gayle and Slaughter hereby declared that January 30 will be deemed Blazer National Championship Day.

As a VSU alumnus, Mayor Gayle relishes the fact that three teams from his Alma Mater have reached the proverbial mountaintop in their respective sports.

“We’re so proud of these teams,” Gayle said with a smile. “It gives us something to brag about. We can brag about the fact that we’ve got three national championships in the last 18 months.”

VSU Athletic Director Herb Reinhard understands the importance of what winning national championships brings to the university, as well as the effect it has on the community.

“Winning those championships and getting the national visibility—it helps our national perception,” Reinhard said. “Any time that the community recognizes our student-athletes for their achievements, that makes me very happy.”

President William J. McKinney, who kicked off the ceremony by thanking the teams and students for attending, had one word to describe what this day means to him and the university.

“This is a lot of pride,” McKinney said. “The city of Valdosta and Lowndes County would organize this parade in our honor—in our students’ honor. That’s just priceless.”

“I will be riding the emotion of this day for weeks to come.”

It goes to show that TitleTown not only consists of the championship teams, but the fans and community as well.