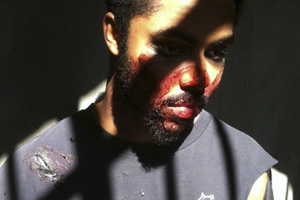 Centennial Hall residents looking for a cool breeze typically crack open their windows, but on Saturday, they got a bit more than they bargained for.

Mark McLeod, graduate mass media major and director of “Tales of the Dead,” gathered his faithful troops at the parking deck to film the second installment of his graduate project/independent film. The movie centers on a zombie apocalypse and follows the individual stories of the humans fighting for their survival. Saturday, the cast and crew were filming the humans’ journey through a parking deck overrun with zombies as they tried to escape.

“After serving as assistant director for the Dragon*Con film festival in the past, I really felt like the VSU Mass Media department deserved to be represented there,” McLeod said. “My goal was to make it as close to a real feature film shoot as possible. My actors and crew deserved that from me.”

McLeod obtained professional, quality lighting and sound equipment for the event and even provided refreshments for his cast and crew.

“Tales of the Dead” is a film in three installments, the second of which was filmed Saturday. The director, the five-person film crew and nearly 30 actors turned out. Twenty of those were made up as the zombie horde.

“It’s always fun getting to use special effects makeup and making people bloody,” Chris Sehested, makeup and special effects artist, said. Sehested was in charge of all zombie makeup as well as multiple effects such as entrails and latex wounds. One of the more memorable effects was the death scene of Andrew Ritfield, mass media and theater major, who was torn in half under a car using a fake body and plenty of “blood.”

The film serves not only as entertainment for the cast and crew, but also as production experience. McLeod emphasized fun and productivity throughout filming. The script changed several times throughout the day to accommodate the actors’ needs. “The finished product has to be in by Apr. 26, so time is not on our side which meant we made a lot of last-minute changes just to get it done,” McLeod said. “I had such a great crew, [so] changing the play at the last minute went perfectly smooth.”

The crew had equally positive things to say about the shoot as the director.

“It was refreshing to work with a combination of students and local talent that were skilled enough to make a successful movie of this quality in one day,” Travis Colwell, sound and lighting technician said. “There was extraordinary work ethic all around.”“Tales of the Dead: Part II” is now in the final editing process and will be headed to Dragon*Con in April.