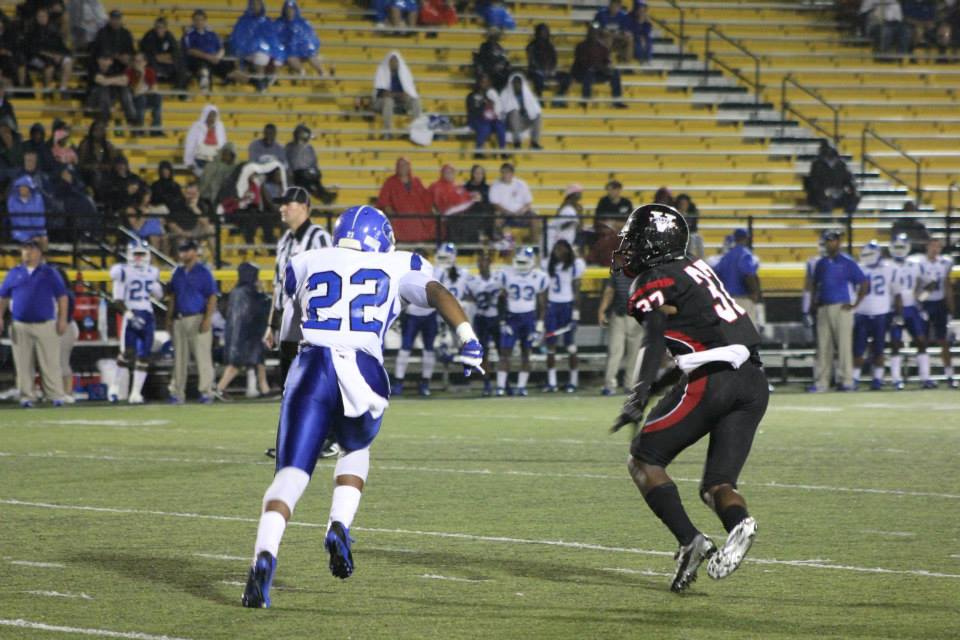 by: Eric Jackson
Valdosta- No.1 Valdosta State (2-0) was tested early on but went on to shutout Shorter (0-3) 41-0 in its home opener Saturday night at Bazemore-Hyder Stadium
The Blazers opened up conference play with their newest rivals.
“I thought our guys played really, really well,” head coach David Dean said. “They created a lot of turnovers in the red zone area. We gave up some third downs which I wish we had not. As we continue on, there will be teams that are going to have more speed than that.”
Shorter came out with their antcipated speed however the Black Swarm adjusted quickly.
The closest the Hawks got to scoring early on was a missed 40-yard field goal during their first wave.
VSU squandered its first scoring oppourtunity when running back Cedric O’Neal fumbled on the 1-yard line.
Neither team could captalize resulting in a scoreless first quarter.
Quarterback Cayden Cochran got into a better rhythm in the second quarter despite troubles gripping the ball.
The senior captain linked up with wide receiver Seantavious Jones for a 22-yard touchdown early on.
On the enusing possession, linebacker Jermey Grable forced his first fumble of the year which placed the Blazers offense in scoring range.
It took only roughly two minutes for VSU to double its lead after running back Austin Scott tallied a 18-yard touchdown run.
With more than ten minutes left in the first half, the Blazers had a 13-0 lead.
The rest of the quarter was a stalemate for both teams as they swapped possessions constantly.
Shorter once again failed to points on the scoreboard in the final minute of the first half.
Hawks quarterback Eric Dodson conntected with wideouts Kareem Hawkins for 17 yards then Darius Turner for 29 yard compeletion.
Defensive tackle Doral White recoreded a sack forcing the Hawks to attempt another field goal.
Three yards shorter than his first try, Hunt missed his second from 37-yards out.
VSU led 13-0 at halftime.
Cochran started the next half refreshed after being affected by the rainy conditions.
“I think he let the weather play a little bit in his mind. They weren’t covering the ball up, he was getting it a little wet so I think it played in his mind. We talked to him about it. We’re going to play games like that, you’re just going to have to adjust,” Dean said.”
He did just that.
Him and the Blazers needed less than a minute to extend their lead on their first drive of the next half.
Cochran tallied his second touchdown when he found fellow captain Regginald Lewis for a 65-yard touchdown.
The Hawks commited their second turnover when they fumbled and didn’t recover on the ensuing drive.
Continuing what they’ve done all game, VSU took advantage of Shorter’s mistakes.
The 47-yard drive was capped off by a short touchdown pass to fullback Trent McGuire.
Cochran finished with 177 passing yards and three touchdowns completing 11 of his 23 passes.
The Blazers weren’t done.
After the Black Swarm forced yet another three and out following the score, the Blazers offense made their way back to the endzone.
Shorter had no answer for the offensive attack and proved once again when O’Neal broke several tackles on his way to a 38-yard touchdown run.
VSU went into the fourth quarter with a cosy 34-0 advantage.
Half way through the quarter, Scott went untouched down the sideline for a 45-yard touchdown run.
Blazers host Angelo State next Saturday.
Eric Jackson 2013-09-26
Rebecca McAleer
Share