A Valdosta man was arrested Wednesday in connection with an Oct. 3 incident in which a VSU student was kidnapped and robbed at gunpoint on campus.

Police remain in pursuit of other suspects involved in the incident.

Michael Humphrey of Valdosta was arrested and charged in kidnapping and armed robbery and is being held at Lowndes County Jail.

All of the charges are felonies. Humphrey is not affiliated to VSU in any way police said.

According to VSUPD a student whose name is being withheld by police was abducted at gunpoint at the athletic field house on West Mary St. around 11p.m.

According to the Valdosta Daily Times, the victim reported being held at gunpoint by two black males.

An attempted kidnapping by suspects meeting the same description was reported that same evening.

The victim was then taken to his apartment and robbed.

After the victim’s apartment was robbed one of the suspects forced the victim to accompany him to the Bank of America ATM at the University Center.

After the victim was forced to withdraw $1,000 from his account he was then released. The suspect then fled the scene.

According to Major Anne Farmer of VSUPD the investigation is on going.

The VSUPD requests anyone with additional information to the crime to please contact the police department at 229-333-7816. 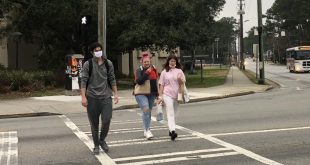