Home / Sports / Baseball / Blazer baseball back on the field 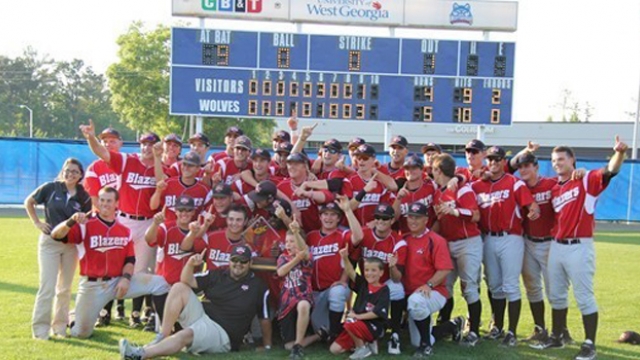 Blazer baseball back on the field

Valdosta State takes the field for its 2014 campaign as the Blazers host the Comfort Suites Classic at Billy Grant Field this weekend.

The Blazers play Truett-McConnell on Saturday at 3 p.m. and Georgia Southwestern on Sunday at 1 p.m.

VSU Head Coach Greg Guilliams is expecting a lot from his players this season, especially coming off of the successes of last season, which include winning the Gulf South Conference Championship for the first time since 2010.

Guilliams maintains that it won’t take anything fancy for his group to build upon last season.

The task of moving on after losing four of their top five pitchers from last season is far from easy; Guilliams understands that his pitchers are not quite at full strength for the season.

“Different guys are at different stages as far as where they are at with their arms,” Guilliams said. “I don’t think anybody right now is at 100 percent, but most of the guys are from about 80 to 90 percent.”

Despite not having a full-strength pitching staff, Guilliams and his staff have named two familiar players as the starting pitchers for this weekend.

“Both [Mann and DeMasi] started for us last year (so we know what they can do),” Guilliams said.

The Blazers’ offense also lost some key swingers, but there are many returning players and some new faces that Guilliams is hoping to see fit into their roles.

Hayman started 52 games last season. He batted .335 with eight home runs and drove in 43 runs, which was good enough to earn a spot on the 2013 All-GSC Team.

One of the new faces that Guilliams expects a lot from is Boston College transfer Jimmy Dowdell, who should immediately make an impact.  Guilliams believes the senior outfielder is “one of the best hitters in the GSC.”

The Palm Harbor, Fla., native came to VSU to be closer to home.

“We have a pretty good squad this year,” Dowdell said. “Our hitting is pretty solid one through nine. We should put up a lot of runs and hopefully not give up too many.”

Aside from team goals, Dowdell has one big personal goal—stay healthy the entire year.

Even with this much offensive talent, Guilliams still expects the bats to be rusty for the first few games of the season.

“A challenge early in the season is that a hitter’s timing is not going to be as good as it will be a couple of weeks from now,” Guilliams said. “Off-speed pitches usually give hitters a lot of trouble so we have been trying to work on that at practice.”

Guilliams has the same approach for the first and last game of the season.

“Our approach remains the same,” Guilliams said. “We try to hit the ball through the middle and backside of the field. If we are able to do that, we will be able to handle the off-speed pitches. It’s nothing different than what we work on at practice; the challenge is getting your guys to do it in a game.”

This article was written by Alex Tostado.