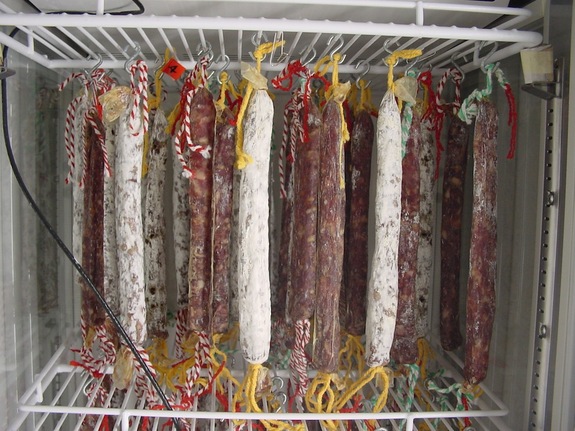 Food and feces are not two words that one would think are associated with each other; however researchers say that certain bacteria found in infants feces may be the key for a healthier food choice.

Fermented sausages are made from a variety of different components; meats, salts, sugars and curing agents. Usually they are fermented with bacteria that is naturally occurring in the meat or other commercially available bacteria.

Recently Spain scientists manufactured sausages using microbes that they isolated from infant fecal matter; they reasoned that the health benefits of live probiotics could be used to ferment sausage instead.

Yes, poo sausages definitely sound disturbing; however according to this new research these bacteria strains could transform fatty, flavorful meats into a healthier food choice, similar to that of probiotic yogurt.

Why use human feces for this process instead of something else you might ask? Well, the human digestive system is a fierce army of acids that helps you digest food.

In order for these probiotic bacteria to work its health wonders it must survive those acids, which is why researchers concentrated on microbes found alive in human feces.

“Probiotic fermented sausages will give an opportunity to consumers who don’t take dairy products the possibility to include probiotic foods to their diet,” said study co-author Anna Jofré, a food microbiologist at Catalonia’s Institute of Food and Agricultural Research’s (IRTA) food-safety program in Girona, Spain.

Although it’s completely normal to find fecal matter disgusting, and to avoid it at all costs, the aversion to it is unequal to its’ true threat. Many strains of bacteria found in human intestines are harmless, some even being beneficial.

If your intentions are to avoid eating any kind of food where the bacteria present was derived from feces, you won’t just have to stay away from poop sausages, you might want to consider going full herbivore.

To read more on this subject please visit:

Or reference the original journal here: