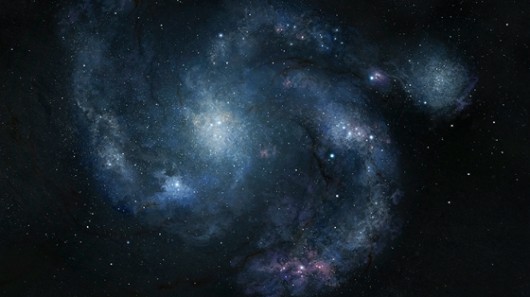 Since the beginning of astronomy the goal has always been to see more, see deeper and learn as much as humanly possible about what exists in the vastness of the universe that surrounds us.

The Hubble Telescope, launch in 1990 made this process much easier, and showed humanity the true wonders and the breath taking beauty that thrives in the unknown world of space.

Through-out its’ exploration a physics defying discovery has been spotted. An extremely large galaxy, I mean huge. So large that researchers had to first verify that they weren’t in-fact gawking at two galaxies that had just so happened to line up.

Much like the Milky Way, it too is a spiral galaxy, but this one is being labeled a “grand design” spiral galaxy due to how large and fully-formed its’ arms are.

“The vast majority of old galaxies look like train wrecks,” stated UCLA astrophysicist Alice Shapley in a press release. “Our first thought was, why is this one so different, and so beautiful?”

According to a study conducted by researchers at NASA this magnificent galaxy (BX422) dates back to around roughly 10.7 billion years. Which means BX422 came into existence a mere 3-billion years after the big bang, on the cosmic time scale this is a relatively short time period.

“The fact that this galaxy exists is astounding,” said University of Toronto’s David law, the lead author of the study. “Current wisdom holds that such “grand-design” spiral galaxies simply don’t exist at such an early time in the history of the universe.”

To read more about this fascinating discovery and many more mind blowing astronomical matters visit: