Approaching their second month, Valdosta State intramural teams are having a positive turnout.

Co-rec softball team Hopper Dynasty is on a winning streak.

The team won their third game with a score of 5-3 on Tuesday, playing against team Tilikum.

Co-Captain Brittney Ikuesan said that the team is in good shape and does not plan on losing any time soon.

“We play hard and try to win every game,” Ikuesan said.

While practicing during weekends on the front lawn to prepare for upcoming games, Hopper Dynasty looks ahead to their competition against Moose Tracks next week.

“Everyone was doing their own thing over Spring Break, so we were unable to practice together,” Ikuesan said. “The weekend we got back we were able to get a practice in before our game.”

Niamani Hollis, a member of One Hit Wonders, was thrilled when the team won their fourth game Tuesday after beating The Hoggs 13-1.

“We’ve been having many practices to prepare for this game over spring break,” Hollis said. “I’m so glad to see our team’s progress. Each member of our team brings something to the table when we compete and we’re all really good friends, which is a bonus.”

It is not too late to register to become part of a team, and you can also sign up your own team.

For more information on intramural sports, go to imleagues.com.

This story was written by Victoria Johnson 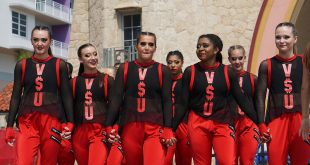