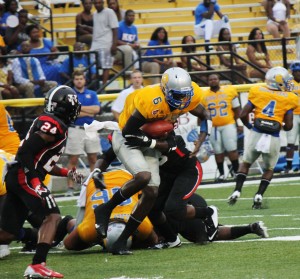 No. 23 Valdosta State (1-0) will take on no. 12 Winston-Salem State (1-0) at 4 p.m. Saturday in the “Cobb County Clash” taking place at McEachern High School’s Cantrell Stadium in Powder Springs, Georgia.

Here we are a couple of years later and the two schools look ready to cross paths again.

“The first thing we have to do is forget about last week,” Head Coach David Dean said about the matchup. “We need to concentrate on what we think is an even better football team coming off a big win. There is a reason why they are No. 12 in the nation.”

The Blazers will have to plan for two quarterbacks this week as the Rams plan to split snaps between seniors Rudy Johnson and Phillip Simms. The two went a combined 24-38 with 230 yards and a touchdown. Johnson also added 45 yards on the ground.

“We have been imitating and game planning for both guys,” Dean said. “Depending on who’s in is how we will dictate how to attack them. We are going to be prepared for both of them.”

The players seem confident in the work they have been putting in to prepare for Johnson and Simms leading up to Saturday’s game.

“We really have been doing a good job getting ready for the both of them,” defensive end Tevin Davis said. “Our scout quarterback has done a very good job of imitating what one guy does versus the other.”

Davis along with the rest of the “Black Swarm” defense will look to build upon last week’s dominant performance and put pressure on the dangerous WSSU offense, run by former Wake Forest offensive coordinator, Steed Lobotzke, who joined the Rams this spring.

Lobotzke and his quarterbacks will be trying to get the ball to receiver Marcel Caver, who exploded for 154 yards and a touchdown on 10 catches last week.

On the offensive side of the ball, the Blazers will look to get running backs Cedric O’Neal and Austin Scott up and running full steam after the pair combined for just 88 yards in season opener.

Scott did, however, add an eight-yard touchdown run in the third quarter, giving VSU a 24-0 lead at the time.

Breaking out for a big game will be a tough task against a resilient WSSU defense. The Rams are led by defensive lineman and Alabama transfer Alfy Hill and only allowed 47 rushing yards last week.

Despite this, the tandem remain confident in the matchup, as they know huge numbers are possible if everyone can work together and step up like the 2012 team did. O’Neal was able to lead the way for the Blazers that day, collecting 140 yards and a touchdown on 24 carries.

“On film they still do the same schemes pretty much,” O’Neal said. “Everyone just needs to play as one, from our o-line and the blocking scheme, to the quarterbacks and wide receivers. If we do that I feel we will have a good game like last time.”

Look for VSU’s offense to try and wear out the Winston-Salem defense with their depth at running back that includes not only O’Neal and Scott, but up-and-coming sophomore Nick Davis as well.

Special teams may be the difference in this early season test for the Blazers.

Look for Vincent Dallas to make some noise out there, as last weekend he showed he was over his nagging hamstring injury when he returned a kick 85 yards for a touchdown on his second touch.

On the other side, WSSU allowed over 330 return yards last week. If they once again allow the return man to get in open space, especially one as dangerous as Dallas, it could spell trouble for the Rams, as field position will play a big part in deciding this game’s winner.

Students interested in attending this matchup can sign up for a free ticket and charter bus ride to the game in the Vice President for Student Affairs’ Office, located on the third floor of the Student Union.

VSU is limited to only 200 student tickets, available on a first-come first-serve basis.

It is about time! My time at VSU has finally come to an end, and ...