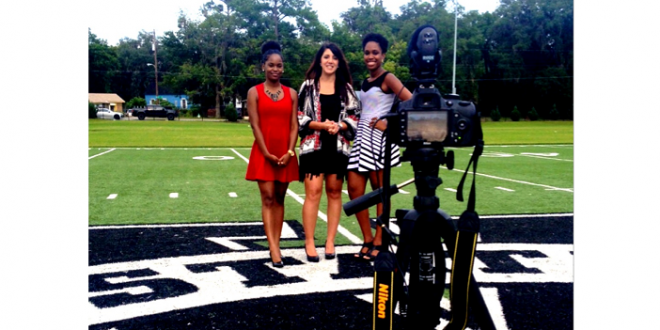 But all the tailgating, touchdowns, and tears hinge on one of the most tedious and thought-out processes of the game: recruiting.
What many fans aren’t aware of is how a player chooses a school. Not only do coaches hunt for the best of the best to play for their team, but they must convince recruits to choose their program.
One of the marketing strategies used at VSU has been a key in its recruiting efforts.

Blazer Pride is a yearlong women-only recruiting club that devotes its Saturdays to the potential VSU players. The women meet once a week to be prepped on visiting recruits so that they may be properly greeted and feel welcome at the university.

“The process as a whole was really stressful and confusing sometimes, but when I visited VSU I felt like family right away,” freshman Defensive Tackle Chris Bahr said. “Blazer Pride and the coaches acted normal and didn’t make me feel like it was an interview like other schools I went to.”

Blazer Pride President Alyssa Riggs goal is to find 30-40 women who are able to offer tours to potential players, and introduce them to the university. She also has to match recruiters with players, get player information, and create player surveys for coaches, as well as host the players’ families.

In the fall, making the players as comfortable as possible means a catered lunch, showing highlight videos of past seasons, and front row seats during Blazer football games.

“Blazer Pride fills a role on Saturdays that can be hard for the coaches to fulfill when they are prepping for a game. Defensive Backs Coach Ryan McNamara said. “There is a lot of walk-thrus, pre-game preparation, pre-game meal, travel to stadium etc. that occurs where the coaches have to be with the team on Saturday. In our absence, Blazer Pride members are able to continue to communicate with recruits and show them around when the coaching staff cannot be there.”

Football recruiting is a whole new world in the spring, where the coaches can focus more on future players. This also means the job of Blazer Pride shifts from 30-40 escorting nearly 200 players and families, to a more personal five or six women focusing on one family at a time.

“Spring visits are official visits, meaning the coaches have asked this player back specifically,” Riggs said. “They are more formal and involve multiple meetings with coaches. This includes breakfast, lunches, and dinners with the coaches, full tours of all campus facilities, and spending one on one time with players at the end of the day.”

Riggs has been with the club for over two years and contributed to the recruiting of 35 new players last year alone. She believes that there has been an influx of new commits since the Blazer Pride club picked back up in 2012, from being dormant for quite some time since its start in the early 1980s.

More players signing just means that lipstick and some parent/recruiter bonding has been an effective part of VSU’s overall recruiting strategy.

“Blazer Pride works on a different level,” former Blazer Pride president Dowling Payne said. “Convincing the mom of the player that our school is the best, means the player will more than likely choose our school. Not only does Blazer Pride chauffeur them around campus, but they have to be polite, make small talk, know their stuff. That is what impresses the families.”

“Recruiting here at VSU is solely focused on the athletic programs as well as the athletes,” Riggs said. “The women involved in Blazer Pride are here because they are educated on our sports, campus, and academics. We ensure that our interactions with the recruits are professional and represent the school in a positive light.”

Blazer Pride itself gives back to its members. The former Blazer Pride President, Payne, is now a full-time VSU admissions counselor and recruiter who travel across the Southeast, convincing high school students to choose VSU. Riggs on the other hand plans to use her newly acquired football knowledge to pursue a career into the world of television sports broadcasting.

“It’s awesome to have helped recruit these guys and it makes me proud to be a part of it,” Riggs said. “I definitely feel like we have made a difference in recruiting.”