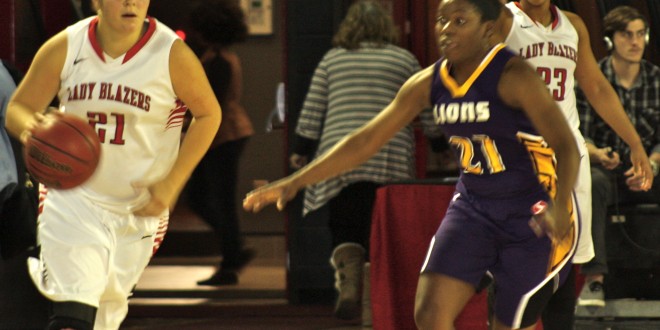 The Lady Blazers basketball is looking to scorch the Hawks as the team prepares for a redemption game against Shorter University.

Losing a battle to the University of North Alabama Lions 63-50, the Lady Blazers fell to 9-10 overall record in the Gulf South Conference.

The team will travel to Rome, Georgia in an effort to bring home a win. During the team’s last meeting in December, the Lady Blazers proved themselves to be too much for the Lady Lions to handle. After trailing by four, the Lady Blazers seemed to kick things back into gear and ended up outscoring the Lady Hawks 48.1 percent to 37 percent. The Lady Blazers were impressively on fire from the free throw line as well shooting 10-14 with an average of 71.4 percent.

“Defensively we have to play great team defense and be able to collapse down on their inside post players so that no one is playing against them one on one because they do a great job down low,” Grubbs said. “We also have to close out on their shooters and try to prevent them from dribble driving to the basket.”

During the first match-up, defense did not seem to be a problem for the Lady Blazers as the team was able to capitalize with 22 points off of turnovers made by the Lady Hawks, while they were only able to score 15 points off of our turnovers.

“We have got to get back to our basics of setting screens and utilizing those screens, as well as making good passes,” Grubbs said. “We will have to run our offensive set and be able to play inside and out and utilize our scorers on the outside just like Shorter is able to do.”

The team has the same goals in mind for tonight’s game and hopes to improve its GSC record even more.

The NCAA earlier today released a statement closing the NCAA Tournament from student and fan ...