Apparently being the “best rapper alive” isn’t enough to keep Lil Wayne from being wrapped up in legal disputes. Trouble seems to be brewing in the Cash Money family as Mr. Carter is suing the Bird for $51 million to be released from his Cash Money contract. He has made it known in the deal that he feels Bird is withholding millions from him. No word on who receives custody of Drake.

Members of Blink-182 announced earlier this week that they’re splitting up. And it got ugly quick. Mark Hoppus and drummer Travis Barker are going public, blasting their dislike for guitarist Thomas DeLonge, stating that he is “ungrateful, disingenuous.” Which led to DeLonge hopping on Twitter to give his side of the story. The breakup keeps getting messier as the days pass.

Howard Stern went on a rant about British singer Sam Smith, calling him “fat” and “ugly” during his SiriusXM show earlier this week. Smith took the high road and went to Twitter to “Ignore” him. A future passive aggressive song should be expected within the next few weeks.

Mariah Carey’s former umbrella holder, Nick Canon has made it a point to be a mess a put his and Carey’s business out in the media. According to reports, Cannon said that he is the sole reason for Carey’s new Vegas residency. In his mind, this leaves him to believe that he deserves a cut of the money.

In what is clearly not a publicity stunt, rapper 2 Chainz said in an interview with XXL that he wanted to run for mayor of College Park. Do I really think he’d actually run for mayor? No. Would I vote for him if he did? Yes, yes I would. Why? I have no clue.

Phillip Phillips is suing American Idol to get out of his “oppressive, fatally conflicted” contract. In his suit, Phillip squared has made claims of mistreatment and low pay.

After several years wait, Rihanna has finally, FINALLY come out with new music. She posted a link to her new song, FourFiveSeconds, featuring Paul McCartney and Kanye West on her official website earlier this week. It received a mixed reaction. The sound is much different from her usual stuff. The trio are scheduled to perform at the 2015 Grammys Awards.

Miley Cyrus and her boyfriend, Patrick Schwarzenegger were seen smoking joints. It’s not considered to be that big of a deal nowadays, but maybe Patrick should tell his parents, Arnold Schwarzenegger and Maria Shriver, that Miley has cataracts.

Previous Once upon a time: ‘Sleeping Beauty’ wakes up audience with performance
Next Canned defense plan does not have the goods 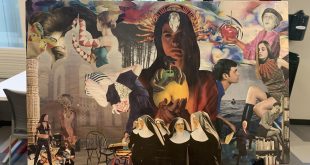 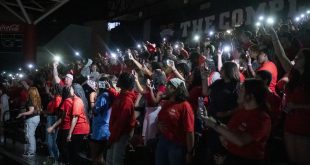