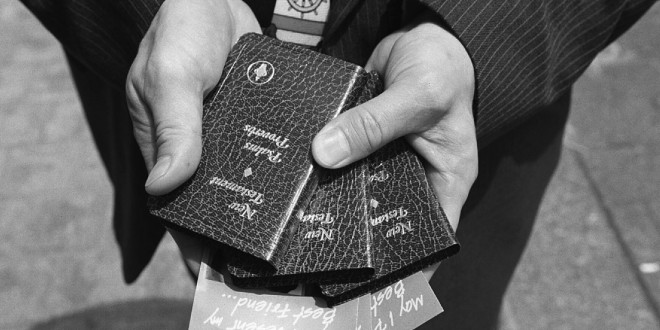 The separation of church and state is hitting close to good ‘ole Valdosta, thanks to Gideons Bible distributers, who asked the Dougherty County school district to allow them to pass bibles out in the local schools.

Whether religion and education should be allowed to inter-mingle is an age-old debate, but the Bible distributers continue to push school districts to allow them in schools.

It is illegal for Bibles to be distributed in public school classrooms. Students may not understand that Christianity is not sponsored and sold by the government or their schools. Schools and the state also believe it infringes on the rights of parents to bring their children up in the religion of their choosing, but shouldn’t students be allowed to decide on their own? Older students can understand different religions and should be allowed to see the good and bad of each one.

Many school districts complain that Gideons is targeting the students by saying that if students want exposure to Christianity, their parents should take them to church. But what about the families that don’t attend church? What about the children whose only exposure to religion happens in school? Whether the students decide to read the Bible is up to them, but it is up to others to at least give them a glimpse of Christianity.

Many anti-Gideons believe that if Bibles are distributed at schools, every religion should be allowed to distribute material at schools. Go ahead; allow students to discover different religions and decide on what religion does or does not suit them.

Gideons targets fifth graders and above. At this age students are not old or wise enough to understand and decide what religion they want to follow. While students should be exposed to religion, it should be at an age where they understand the information and choices to follow.

There are many “should” and “should not’s” when it comes to the separation of church and state, and the argument seems to be here to stay. The line is fine, but it is blurry. Students deserve to be informed about different religions, whether it comes from their home or strangers at their schools.