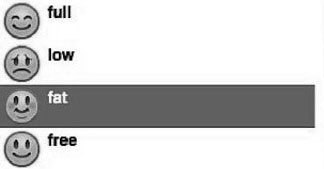 Are you feeling fat after eating that third slice of pizza? Don’t tap your Facebook app to complain about it.

An activist group, Endangered Bodies, petitioned for Facebook to delete the option of adding “feeling fat” to your status and complained that it made fun of people who may feel overweight. Sixteen thousand people signed the petition and Facebook listened.

“We’ve heard from our community that listing ‘feeling fat’ as an option for status updates could reinforce negative body image, particularly for people struggling with eating disorders,” a Facebook spokesperson said. “So we’re going to remove ‘feeling fat’ from the list of options. We’ll continue to listen to feedback as we think about ways to help people express themselves on Facebook.”

The initiator of the petition, Catherine Weingarten, says “feeling fat isn’t a feeling.”

How often have you sat at your mom or grandma’s table and inhaled a ham, deviled eggs, sweet potato casserole, green beans and a biscuit, and stretched out on the couch saying, “Man, I feel fat.” You may not technically be overweight, but after eating so much food, you feel as if you are. That’s feeling fat, and contrary to Catherine’s opinion, it is a feeling.

While many Facebookers may use the emotion as a joke or to express the feeling of a satisfied stomach, Endangered Bodies has encouraged Facebook to reinforce positive feelings about its users’ bodies.

Catherine suffered from an eating disorder, and if the feeling fat emotion offends her or anyone who has suffered with body image problems, it is inspiring that she made an impact toward counteracting the negative image that people in this world often see in themselves.

It is refreshing to see a billion-dollar corporation make a change for fear of its users feeling negative about themselves. Social mediums are often outlets for children and adults to voice their lack of self-confidence or criticize other users’ bodies. Facebook is making that a little more difficult with the simple step of deleting an emotion and emoji.