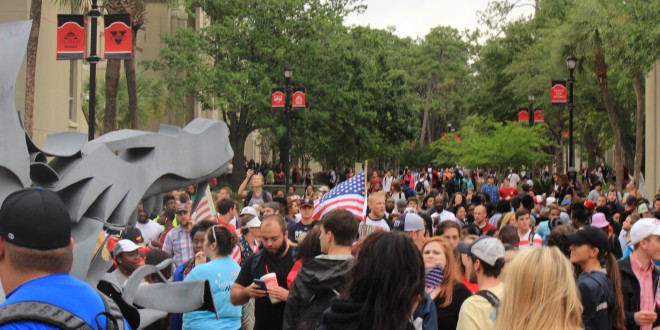 The science behind sticking to your race

Although segregation was outlawed in the 1960s, students sometimes tend to segregate themselves from people outside of their race. However, this action may be caused by sociological factors rather than personal choice.

When looking at the statistics, VSU can be called a diverse college. According to Niche, 35 percent of VSU students are African-American, 54 percent are white, 4 percent are Hispanic, 2 percent are international, and the other 1 percent is Asian.

Despite the wide range of backgrounds and cultures at VSU, students can sometimes be found to normally associate with people of the same color. However, there are some organizations on campus that demonstrate a diverse group of students, such as the Gay-Straight Alliance, Anime & Manga, Tau Kappa Epsilon and Women of Diversity.

The Women of Diversity president, Kandice Smith, finds joy that her organization is able to break past the differences in skin color.

“The main reason I love my organization so much is that I learn about them as individuals, but I also learn about their culture through their conversation, their experiences,” Smith said. “We represent over 20 nationalities, but at the end of the day we see each other as human beings, with feelings, dreams, ideas, and goals. We see each other as sisters. It just so happens that some of us have more or less melanin that the other.”

Smith believes that the separation between races that may occur is not always intentional and that society plays a major role in the way people view racial differences.

“I believe that people have the tendency to stick to their own race because it’s comfortable, it’s familiar,” Smith said. “It’s so much easier to think to yourself, ‘she and I have something in common because she and I have the same skin; we must have experienced the same things growing up. We must have the same culture, the same heritage, (and) the same ideals.’ I think it’s a subconscious method of survival (in) a way. It is both a psychological and sociological thing.”

Smith is correct — it is a sociological factor. Thomas Hochschild, VSU sociology professor, has studied race for years.

“You’ve heard the phrase ‘birds of a feather flock together,’ right?” Hochschild said. “Sociologists call this tendency for people who are similar to stick together the ‘homophily effect.’ Race, ethnicity, social class, gender, religion and political affiliation are but several characteristics that people use to organize themselves. People are generally more comfortable being around others with similar values, attitudes and behaviors.”

According to Hochschild, the way people view race begins at a very early age and starts in the home.

“Parents can counteract the homophily effect by seeking out a diverse group of playmates, as well as a home in a diverse neighborhood, for their children,” Hochschild said. “These children are more likely to be open-minded about others when they become adults.”

Hochschild feels that despite the fact that many people are more comfortable being around people who are more similar to them, many students at VSU don’t let differences in skin color change who they socialize with.

“One thing that I love about Valdosta State University is that students of different races and ethnicities can be seen interacting throughout the campus,” Hochschild said. “At other universities I have taught at, I typically saw ‘co-presence without co-mingling.’ In other words, people of different races and ethnicities would be in the same room or geographic area, but they rarely interacted with each other.”

While some teachers believe that race does not affect our campus, some students feel otherwise.

“I personally believe that (race) does (affect) VSU,” Smith said. “It affects many campuses across the United States. We are the nation’s future. Many of the students on campus are the result of interracial/intercultural relationships. To have such a clear divide, to see each group hang out with their own can be difficult for those students, and it can also be challenging for those students who desire to reach out to others who are unlike them. I feel as though it causes a ‘them vs. us’ mentality.

“In the United States, society dictates that you should stick with ‘your own kind.’ A lot of people see an interracial couple or even a group of diverse ladies, such as the ladies in my organization, hanging out…and it’s an anomaly to them. It is an anomaly because we are taught to stick with our own,” Smith said.

Hochschild said people are all too quick to say race isn’t an issue in our world.

“It is fashionable for people to say that ‘a person’s race doesn’t matter to me,’ or ‘we should just ignore race and it will go away,’” Hochschild said. “The problem with this line of thinking is that there are significant racial disparities in the United States in regards to the criminal justice system, socio-economic status, educational outcomes, political representation, health outcomes and media depictions. To ignore race is to ignore the harm currently being inflicted on millions of people because of their race. Sociologists refer to these pleas to ignore race as a form of ‘color-blind racism.’

“As good Americans and responsible citizens, we need to be informed about racial data, and mature enough to address these disparities in a meaningful way,” Hochschild said.