One week after protesters walked on the American flag at Valdosta State’s campus, hundreds of students, veterans and community members rallied along VSU’s perimeter under a clear blue sky to show support for the American flag. 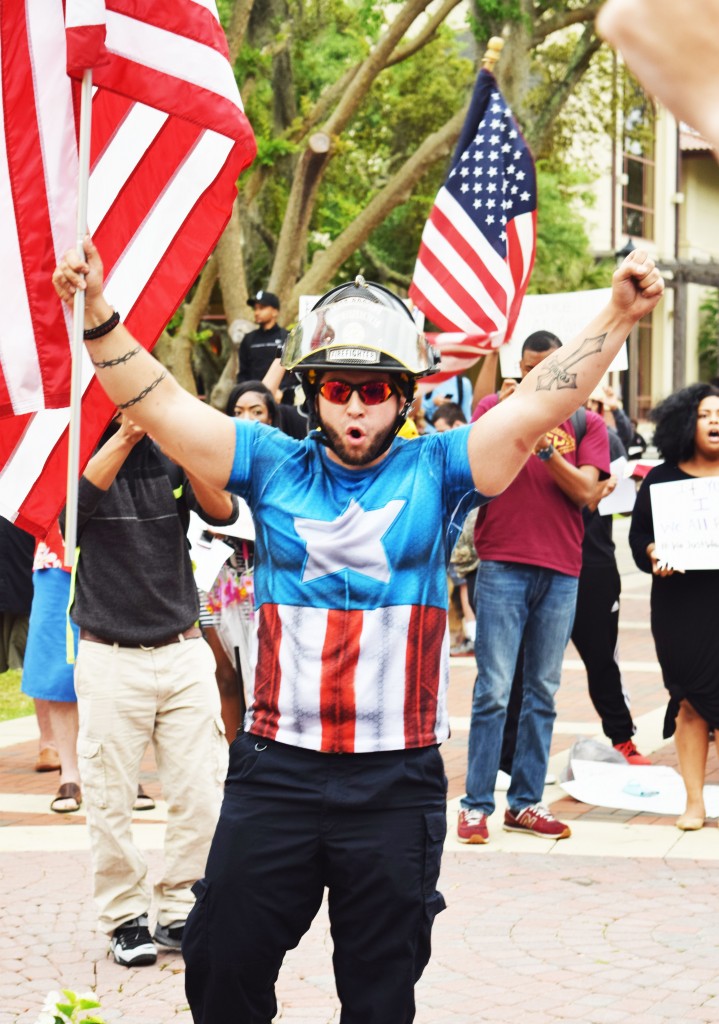 Around 1,000 people took part in the “Flags Over VSU” demonstration – according to Valdosta Police Chief Brian Childress – by either driving around campus with American flags streaming in the wind or lining the sidewalks around VSU, waving the red, white and blue flags vigorously.

Before the rally, drivers and bikers met up in the Big Lots parking lot at Five Points, and Air Force veteran Michelle Manhart addressed the crowd there.

“Today our main goal is to remind everybody that we are one,” Manhart said. “We are one big team, one big family. We have freedom, and we are allowed to rally like this because we have freedom.”

Manhart was detained, but not charged, by police on April 17 after she attempted to take an American flag from the protesters walking on it. After video of this incident went viral, gaining millions of views, Manhart planned the Flags Over VSU event.

On Friday at 1:30 p.m., the convoy of flag supporters left the Big Lots parking lot and drove to VSU’s campus, where they were met by crowds filling up the sidewalks.

Cars honked, people chanted, motorcycle engines revved, and patriotic songs blared from passing vehicles, all to give praise for the country’s flag, which was held high throughout the entire rally, literally and figuratively.

“It’s about time we stand up for our country and our flag,” Karen Haldeman, Ray City citizen, said as she cheered along Patterson Street, wearing red and white and waving a small American flag. “We’re not perfect, and we got problems, but we can work it (out) the right way.”

Again and again, rally participants said the flag represented freedom to them, and Army veteran Jason Elliott was no exception.

“A lot of us veterans, past and present, we shed our blood, sweat and tears for that flag,” Elliott said. “Why I say it stands for freedom is because it gave you that right to sit there and be able to protest. To me, (walking on the flag) is desecration. Nobody has the right to walk on the flag; I don’t care who you are.”

Joseph Williams, an Army veteran and VSU alumnus (1991 and 1995), stood on Patterson Street, flying the American flag from his stepfather’s coffin. His stepfather died while Air Force active duty, and Williams has only flown his flag one other time: on the first anniversary of 9/11.

“(I’m out here) for those who can’t be here, the ones who died for our freedom,” Williams said. “The flag means freedom. It means blood; people died for it.”

While VSU’s outer perimeter was packed full with vehicles and pedestrians, the campus itself resembled a ghost town, apart from the heavy police presence.

Previous Valdosta community, take a breath and calm down
Next VSU golf rolls into tournament action