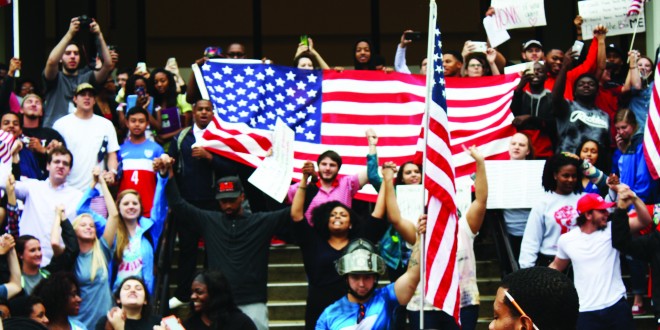 Photo Credit: Tyra Mills/THE SPECTATOR Student joined together on Monday, April 20 to express their opinions regarding the protest that took place on Friday, April 17.

Valdosta community, take a breath and calm down

With protests breaking out at Valdosta State, a Blazer may be beginning to question what is going on with our beloved campus. Students have been stepping on flags, veterans coming on campus allegedly “armed” in protest of it, black lives matter campaigners joining the march and many students inserting their opinions and adding to the mayhem.

Social media has been on fire this week; students are voicing their opinions as well as people who don’t even attend Valdosta State University and have no intentions of ever even coming to this city. For some students, the recent turn of events has given some the idea to leave. For others, this has brought out their Blazer Pride.

This past Monday, countless people were on the pedestrian walk, yelling, crying, recording and watching the numerous demonstrations happening. It seemed as though there were a lot of different groups of people with different agendas, passionately wanting to be heard and understood.

I understood those who came out to show their patriotic feelings about the flags. I spoke with and listened to many veterans and soldiers who felt the protestors who walked on the flags were being disrespectful. This is completely understandable because they put their lives on the line for this country.

To me, the definition of a flag is a cloth used as an emblem or symbol of a country or institution used as decoration during public festivities. I feel as though both parties are inserting too much symbolism into this object. The initial protestors who stepped on the flag felt as if the flag represented injustices and prejudices put upon African Americans in this country. I’m assuming the opposing protestors probably felt that the flag represented those who died fighting for this country and those who risk their lives and give their lives for the citizens of this country.

Again, I completely understand why someone would be upset about people walking over our flag. I just question why no one is upset that Michelle Manhart posed nude and completely sexualized the flag. The same woman who was arrested for trying to so-called protect a flag, draped the same flag around her body and posed nude with it. Sexualizing the flag seems just about equal to walking on it to me, and yet there has been no protest against her.

Ultimately, the community of Valdosta needs to calm down and take a breather.