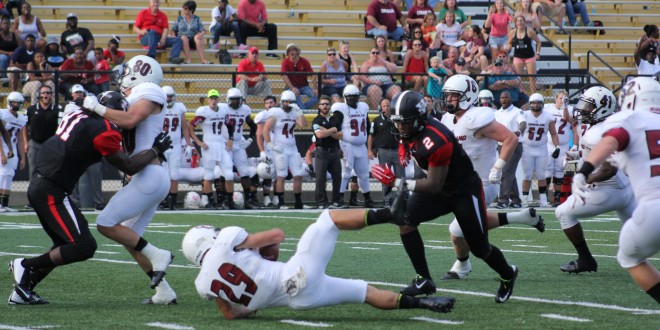 Xay Howard shakes a defender during the Blazersloss to North Alabama on Saturday. The first Gulf South Conference game ended in favor of the Lions, 34-12. (Photo Courtesy: Darian Harris/THE SPECTATOR)

The Blazers are going to have an opportunity to rebound in a big way.

VSU takes the road for what will be a can’t-miss matchup with the No. 2 ranked West Georgia Wolves. The Blazers stomped the Wolves 40-6 in their regular season meeting a year ago, but VSU’s 2014 season was ended by UWG with a 31-17 playoff loss. West Georgia would go on to lose in the semifinals to eventual national champion CSU-Pueblo.

The Blazers (3-1, 0-1) are coming off a disappointing 34-12 conference loss to North Alabama, but can put that game in the far back of their minds with a victory in Carrollton this Saturday. However, that will be no easy task.

Under second year coach Will Hall, the Wolves (5-0, 1-0) have become a powerhouse. Now with 17 wins at UWG, Hall won three playoff games last season for a school that had not registered a single D-II postseason victory prior to his arrival. In just his first year at the helm, over 30 school records were broken.

Before taking over at UWG, Hall had Gulf South Conference success at West Alabama. Among the players he developed at that program was Malcolm Butler, the New England Patriots cornerback well-known for his game-winning interception in last year’s Super Bowl.

West Georgia has been as good as advertised through five weeks. The Wolves have abolished the opposition to this point. UWG’s closest victory came last week in a 32-14 win over previously unbeaten West Alabama. The Wolves average 44.4 points per game and have not scored less than 32 all season.

Defensively, UWG is also outstanding. The Wolves are #1 nationally in run defense, allowing an average of 37.2 yards each game. That will present a titanic clash between their defense and VSU’s stout rushing offense.

Of note is the fact that VSU is the first ranked opponent on UWG’s schedule. As good as the Wolves have looked, they have benefited from lesser competition. Playing in VSU’s favor is that they have played solid teams and battled through adversity early in the campaign.

Coach David Dean acknowledged the challenge ahead, but has complete faith in his team.

“We just have to go back to work,” said Dean. “We have to stay positive, we have to work hard, and we have to correct the mistakes that we are making right now. We have to stay positive and keep working together. We’ve been in this situation (early conference loss) before, so from a panic standpoint, we’re not going to panic and hopefully we’ll make a run here down the stretch.”

Previous Volleyball’s Epic Streak Ends
Next What are your fears/worries now as a college student? 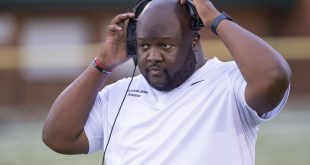