VSU softball: The best team you know little about.

I had the pleasure of covering the Blazers doubleheader against Georgia Southwestern on Tuesday. VSU swept the series with scores of 3-1 and 11-3. The ballpark was loud, exciting and alive.

If you haven’t been, you’re missing out.

The attendance was 241, but it should be infinitely more. The 2012 national champions look poised to repeat that feat this season. But the girls need your support.

The Blazers are certainly road tested. The team only played five home games in the season’s first month and change. But there are still five contests remaining at Steel’s Diamond before the tournament begins.

VSU is arguably the most electric softball team in division II. The team features the conference’s best hitter, pitcher and (arguably) coach.

The Blazers’ success begins and ends with their power. VSU has blasted 50 home runs to lead the Gulf South Conference. Four of the top seven sluggers in the GSC don the red and black.

“We usually do win by the homer,” said coach Thomas Macera after Tuesday’s wins. “We live and die by hitting the ball hard.”

With her 13th long shot, Kiley Rusen now leads the GSC in bombs. Brandy Morgan hit one out as well on top of making a sensational diving catch that will be a strong candidate for defensive play of the year.

Speaking of defense, VSU’s is elite. Its .978 fielding percentage is tied for best in the league, while only 20 errors is the fewest of the 11 teams.

With hitting and defense covered, VSU completes the trifecta with top-tier pitching. Championships are won on the mound, and the Blazers have an exception assortment of arms.

The Blazers’ 1.96 collective ERA and 64 runs allowed is second in the GSC. Their 13 shutouts is tops in the conference.

Much of that success should be attributed to Caitlyn Calhoun. It wasn’t as smooth as usual, but Calhoun tossed her 22nd complete game against the ‘Canes on Tuesday.

The ace leads the GSC with a 1.49 ERA and 152 strikeouts. So while the lineup is hitting dingers left and right, Calhoun is mowing down the opposition.

Baseball and softball are considered “boring” sports. I challenge those who believe that to visit Steel’s Diamond.

The atmosphere is everything one can desire for a softball team; but you’ll have to see it for yourself.

I wrote this memo as a challenge to Blazer nation. Go at least one of the final five home games. This team is a title contender and deserves every bit of this community’s support.

The Blazers’ next home appearance will be April 7 against Albany State. The home schedule fills out with a three-game series versus Alabama-Huntsville on April 9-10.

Previous Get thrifty: $20 Thrift Store Challenge
Next Comfort food to eat before heading back to school 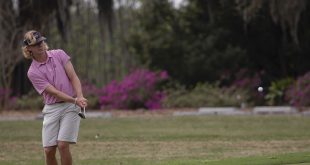