Valdosta State Theatre & Dance’s run of “Oklahoma!” opened last Thursday to a nearly sold out theater and a well-deserved standing ovation. The first night of “Oklahoma!” at VSU marked the 73rd anniversary of the musical’s opening night back in 1943.

“Oklahoma!”, a classic Broadway musical by Oscar Hammerstine II, follows the love story of Curly Mclain and Laurey Williams, capturing the lives and struggles of an eclectic cast of characters in a small town outside of Claremore, Ok., as the story unfolds.

The show started on a high note with Wendell Hester as Curly singing the iconic “Oh, What A Beautiful Morning” and only went up from there.

The tense dynamic created between Jud Fry, a rough-looking farm hand who is in love with Laurey, Laurey herself, and Curly was believable and almost palpable thanks to the acting skills of John Sanders, Larrren Wood, and Hester. Sander’s performance in “Pore Jud is Daid” and “Lonely Room” brought the character of Jud to life with a warm singing voice that was arguably the best in the show.

Each back-ground actor and dancer deserved their own standing ovation, as both were superb. All actors stayed in character throughout the show, creating a sense of realism. The level of professionalism of each dancer and actor on stage lent itself to a truly impressive show of very high quality. This musical is one I won’t soon forget and, as Aunt Eller says to Laurey, “If you can’t forget, don’t try to.”

Valdosta State Theatre & Dance will wrap up the year with two non-ticketed events. Graduating seniors from the musical theatre program will hold performances on Thursday, April 21 and Saturday, April 23, at 7:30 p.m., while the theatre will present “Too Much Light Makes the Baby Go Blind: 30 Plays in 60 Minutes” on Friday, April 22 at 7:30 p.m. and Sunday, April 24 at 3:00 p.m. 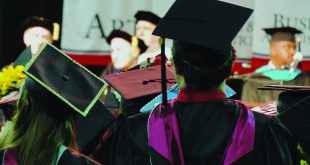 Top 5 things to do before graduating

People say your school years fly by in the blink of an eye. At the ...