Election 2016: VSU ponders at the polls

“Why don’t Millennials vote?” asked one Washington Post article after Sen. Bernie Sanders stepped out of the presidential race back in March.

The article went on to analyze voter participation data gathered by the General Social Survey in 2014. In the end, the data showed that Millennials are no less politically involved than other generations. It seemed Millennials just preferred direct contact with their local governments and participating in protests, marches and boycotts over going to the polls.

Will Valdosta State students participate in this election cycle?  Most students say that due to the nature of the election they will participate, but others are still disinterested.

“I am voting, especially because this is a pivotal election.” Alex Persons, junior psychology major, said.

According to Pew Research Center, as of July 2016, Gen Xer’s and Millennials, essentially college-aged people and their parents younger than 51, make up 56 percent of those eligible to vote. These new numbers make the young adult vote more essential than ever before.

Samekh Ward, a senior business major, said she felt encouraged to vote this year even though she never had before. “I feel like this year is a good year to exercise my right to vote,” she said.

Other students seemed to want to vote simply to keep an unwanted candidate from office.

“I plan on voting once I get my absentee [ballot] because I’m from Florida,” Raven Jackson, a freshman psychology major, said. “I want to vote because I want to make sure Trump doesn’t get into office, basically.”

Though Millennials seem to be a large percent of people eligible to vote, whether or not they will make up a large amount of registered voters who come out to this election is yet to be seen.

“I’m not voting because I do not pay much attention to politics.” Jacob Carter, a freshman criminal justice major, said.

According to Pew, only 46 percent of eligible millennial voters participated in the last presidential election, cutting the voting power they could have had by almost half. The same level of turn-out this year could keep Millennials from having any real power in the polls at all. 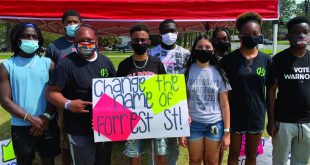