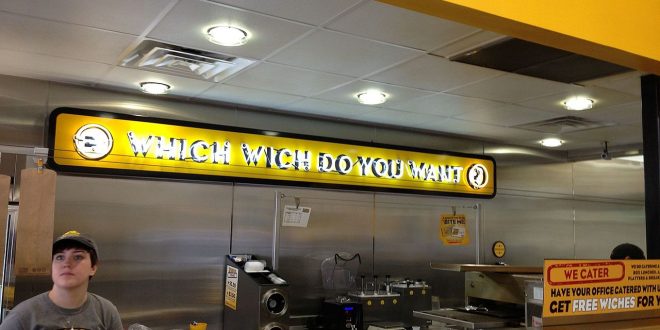 VSU’s newest restaurant, Which Wich, aims to make eating there an experience

VSU’s newest restaurant, Which Wich, aims to satisfy its customers and make eating there not just a pit stop but an experience, so that it may have the same success it has had on other college campuses.

VSU’s dining options provider, Aramark, works with many colleges and suggested that Which Wich come to VSU. Which Wich is best known for its creative ordering system where customers how they want their sandwich to be made on a sandwich bag.

The company additionally encourages customers to draw on the bag so that it can be displayed like artwork as it moves down the line.  Drawings on the bag also allows customers to track their sandwich’s progress and identify which meal is theirs if they forget to write their name.

“For us it’s about taking customers on a journey,” Jeff Vickers, Which Wich Senior VP of Development, said.

Which Wich wants to eliminate the “sandwich shuffle” of slowly waiting in line and reduce sandwich mistakes. With each order’s specifications written down, there are less issues with miscommunication.    The company also tries to accommodate all kinds of students by including vegetarian options and healthy options.

“Our brand is all about customizing,” Vickers said. “There are so many different options that students love.”

A large portion of VSU students are commuters and the dining options on campus are a common alternative to bringing a lunch. Sometimes eating out means healthy or meatless options are not readily available.

“I love the fact that Which Wich gives more control to the consumer,” Njeri Pringle, Graduate Assistant said. “At Which Wich you create the template.”

According to Whichwich.com, in 2015 Which Wich became a recipient of the Nation’s Restaurant News MenuMasters “Healthful Innovations” award.

Which Wich has been recognized in many other ways since its founding in 2003 for its success, variety and unique ordering. Additionally, Which Wich has managed achievements such as breaking the “Guinness Book of World Records” for most sandwiches made in an hour, according to Whichwich.com.

Previous Should we do away with Electoral College?
Next VSU’s cross country runs into some stiff competition