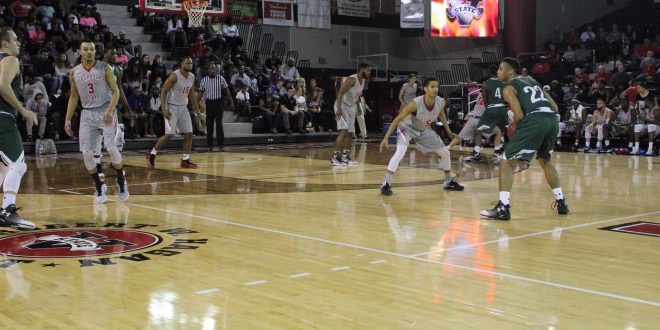 After a fiery matchup with West Florida that featured technical fouls, dunks and other forms of excitement, VSU will look to scorch rival West Georgia.

Blazer Basketball beat the Argos for the second time this season behind a 27-point performance from Jeremiah Hill. UWF never led in the game, and the Blazers were up by 23 in the second half, but the game did not lack excitement.

The Argos were in the midst of mounting a comeback when their second leading scorer, DJ Thorpe, was called for consecutive fouls on offense and defense. Thorpe lost composure and yelled obscenities at the referees, which got him ejected from the game.

This sequence came after Moter Deng had fouled out for the Argos just minutes before hand. This essentially broke the will of West Florida and secured the 89-82 victory for the Blazers.

Throughout the game, players from West Florida talked trash and tried to make the Blazers lose their composure. It never worked, and no VSU players were ejected nor fouled out.

“We’re too old,” Hill said on buying into other team’s tactics. “We know this is what other teams are going to try and do at this point in the season. If that [ejection] happens to us, we get suspended for a game and that hurts our team.”

If any of the Blazers got ejected, they would be forced to miss possibly the most heated rivalry in the Gulf South Conference. The West Georgia Wolves are coming to Title Town for a GSC matchup that has created a lot of noise and hype around campus. That hype, however, did not carry over to the basketball team.

“We’re going to do what we always do,” Hill said. “Nobody is any more special than anybody else.”

Head Coach Mike Helfer is not buying into the hype of the seven-game win streak that the Blazers are on either.

“We’re looking at the next game, which happens to be West Georgia,” Helfer said. “If we aren’t excited to play in that game then something is wrong.”

Whether he acknowledges it or not, the Blazers are on the longest win streak in the GSC.

They are leading the league in scoring, field goals and steals. The team is in the top five for 3-point field goals, free throws and rebounding. They’ve also built up a lot of expectations from fans, and they’re becoming known for their pregame dunk contests. Their 15-3 record is a conference best and they are building steam before the conference tournament in February.

Helfer said the Wolves’ depth is one of their strengths.

“They play a lot of people; they’re deep; they’re very talented; and they utilize that depth every game,” Helfer said. “We hopefully maybe can match that with some of our bench play.”

VSU beat UWG 79-70 at their last meeting. The Blazers’ defense stepped up during the game, and the Wolves were only able to take the lead for a total of two minutes and 37 seconds.

“Well, I don’t know if we really stopped them as much as they just missed some shots,” Helfer said. “We’ve just got to play hard, and try to keep them out of the paint. We need to dig down defensively because they are very talented offensively.”

Helfer said the team’s chemistry and morale are two main reasons they’ve been so successful.

“It’s not too hard to maintain morale when you’re winning,” he said. “However, it’s been like this from day one. This team is very close knit, they like being around each other, and they like coming to see each other every day. That helps develop chemistry rather than it just happening.”

A Blazer loss could mean losing the conference lead. They currently own sole possession of first place in the GSC with a 10-2 conference record. Alabama Huntsville is in second, but with a Blazer loss and the defeat of Delta State, they’d take over the top ranking.

Blazer fans will surely point out VSU Football’s win last fall, when they captured the covetedPeach Basket away from the Wolves, 38-27.

The Blazers will take on UWG tonight at 7 p.m. in the P.E. Complex.