Home / Sports / VSU women heating up at the right time 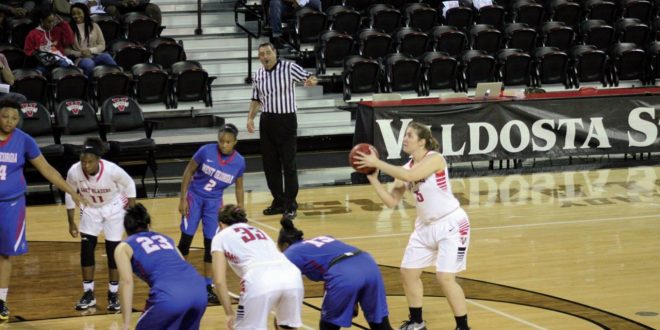 VSU women heating up at the right time

On Saturday, the Blazers accomplished a feat that had not been done in over 30 years after beating Delta State in Cleveland, Mississippi, for the first time since 1983, by a score of 48-38.

The win over Delta is an accomplishment that even former student-athlete and current head coach Carley Kuhns didn’t accomplish during her Hall of Fame career as a player from 2004-2008.

The Blazers had to battle for the win, and it did not look bright throughout the game. In the second quarter, VSU only made two field goals and one free throw equaling five points. However, in the fourth quarter VSU outscored the Lady Statesmen 19-4 to secure their victory.

Kuhns said the victory was a confidence builder for the season ahead.

Confidence will be key in the upcoming games against Union and Christian Brothers. The Blazers knocked off Union earlier this season when the Bulldogs were ranked No. 24 in the nation.

“They’re going to want a little bit of a revenge against us,” Kuhns said. “We beat them when they were a ranked team, but it has been two months. We’re both completely different teams.”

Kuhns said their preparation for Union would be different than other teams because of how well Union shoots the ball. The Bulldogs are second in scoring and field goal percentage and third in three-point percentage.

The Lady Bulldogs also lead the GSC in free-throw percentage, shooting almost 80 percent as a team.

“We’re going to need to be really locked in and know their game plan,” Kuhns said.

Union had 21 bench points in the first matchup with VSU, while the Blazers had none. The bench only accounts for 12 of the Blazers 69 points per game average.

Earlier this season, Kuhns said she feels like she has four to five players that can score 20 or more points on any given night. While she admitted the players she referred to were her starters, she said she wasn’t worried about her bench’s production as far as scoring goes.

“I think everyone at this point has figured out their role and what they’re great at,” Kuhns said. “Jaz McIntosh knows she’s our best rebounder and best defender. Those things might not show up on the stat sheet but they win us games.”

McIntosh has 91 rebounds and 17 steals on the season, neither of which is a team high, but as Kuhns said some things don’t show up on the stat sheet.

Kuhns and McIntosh said they were taking the season one game at a time, but they said it is getting closer to GSC tournament and standing will matter.

“If we handle business game by game, it’ll set us up for the end of the season,” Kuhns said.

Kuhns said the team has put a target on its back by climbing back to the top of the rankings. She said they’ll get everyone’s best shot, but it’ll make the team stronger.

The Blazers are currently third in the GSC. Sitting currently at seventh, Union is a potential post-season opponent for VSU. The teams VSU faces on Saturday are within striking distance in the conference standings.

Christian Brothers is currently fifth in the GSC and could better its spot with a win over West Florida on Thursday.

The Blazers will face Union tonight in the P.E. Complex at 6 p.m., and they will host Christian Brothers on Saturday at 2 p.m. in Valdosta.