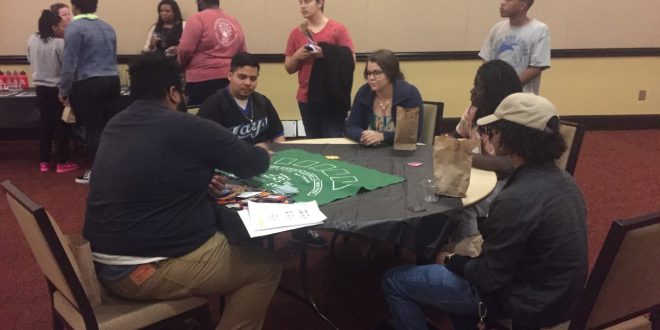 On Thursday, Feb. 9,  the Residence Hall Association hosted a free event called Condom Casino where students learned about safe sex by using condoms that they got to keep as their playing chips.

There were over 100 students who attended this event where they learned information about sexual education while playing casino games such as poker, roulette, blackjack, spades, and other fun activities.

Dahnea Finkley, president of RHA, shared her insight on why their association wanted to host this event for students.

“The whole purpose is to have the students learn about safe sex through a safe environment,” Finkley said. “Each time a student plays a game, they will be given a card that has information and statistics over safe sex.”

In addition to having casino games, the RHA served a variety of foods and mocktails during the event to match their casino night theme. Students also had the opportunity to win prizes that ranged from electronics to boxes of condoms.

One student who attended Condom Casino gave her opinion over the event.

“I wanted to attend this event so I could learn more information on safe sex. I enjoyed playing the fun games that they had as well as enjoying the delicious food,” Angel Hammond, a sign language interpreter major, said.

To raise awareness for sexual education, the RHA displayed a power point throughout the event that presented information, facts, and statistics about why people should have safe sex.

Ta’Shionna Bradford, senator of RHA, also helped with hosting the event and talking to students about safe sex.

“Condom Casino is an event that can relate to college students. Our association wanted to host this event, because it was able to get the message across on promoting safe sex,” Bradford said. “Plus, who doesn’t love free condoms?”