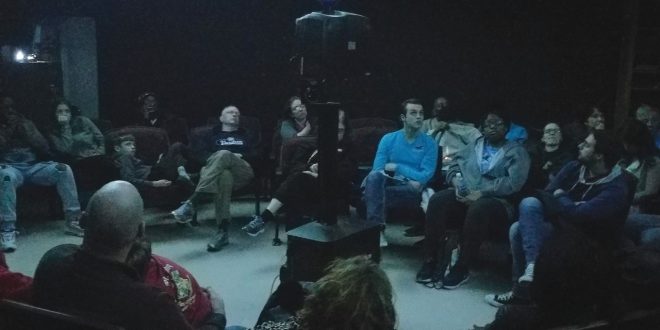 Astronomy shoots for the stars

College: the final frontier. These are the voyages of the starship Blazer. It’s a four-year mission for astronomy majors: explore Odum library, seek out new ways to stay up all night, and boldly go where plenty of students have gone before.

Astronomy isn’t just a field in the Department of Physics, Astronomy and Geosciences students can major in.

Not only does the department provide courses for students who decide to major in these sciences, it also holds events that allow students and the community to learn about the stars, like planetarium shows.

Last Friday the department held three showings in the planetarium, giving families and students a view of the penumbral eclipse and black holes. Professor of Physics and Astronomy, Dr. Martha Leake, held the reins of the show as she took the audience on a journey through the stars.

In addition to the penumbral eclipse, Mars and Venus were also visible, as well as quite a few constellations such as Cassiopeia, Ursa Major and Ursa Minor. Dr. Leake also gave the audience a tip about the North Star.

“The easiest way to find the North Star is to find the Big Dipper (Ursa Major),” Dr. Leake said. “If you look for the brightest star, you might end up following Rigel or Venus.”

As the presentation continued, Dr. Leake told the audience what the title of the show, “Whispers from the Cosmos,” came from.

“The chirp that black holes make when merging is the whisper from the cosmos,” Dr. Leake said.

Dr. Leake ended the show by telling the audience her plan to consume them with a black hole: a simulated one which she then showed on the projector.

The astronomy department also has an astronomy club called the Valdosta State Astronomical Society, and the department gives back to the community.

“We give planetarium shows free of charge to school groups and civic organizations during the daytime,” Dr. Kenneth Rumstay, professor of physics and astronomy, said. “We also give free tutoring services for students in introductory courses (for astronomy).”

As another service to the community, all science departments including astronomy have “Science Saturday,” where professors from VSU set up experiments and activities for children around the community.

Part of what makes VSU’s astronomy department so strong is their part in the creation of the Southeastern Association for Research of Astronomy. The organization currently has three telescopes around the world. One is in Arizona, one is in Chile and one is on the island of La Palma.

“To be honest, the southern skies in Georgia are not very good for astronomy, but these three telescopes are under superior skies,” Dr. Rumstay said. “We don’t have to go there to use them; we operate them from our offices or homes over the internet.”

Dr. Rumstay said even though the sky isn’t clear in Valdosta, VSU still has the ability to send astronomy students around the world to do research.

Planetarium shows premiere once a month, and the next show, “The Soot Between the Stars,” is set for March 10.

Shows are free to VSU students, and go on sale at 6 p.m. on Friday, though lines form much earlier.

Tickets are distributed as place-holders on a first come, first serve basis.

Parties no bigger than seven may reserve their tickets together at one time.