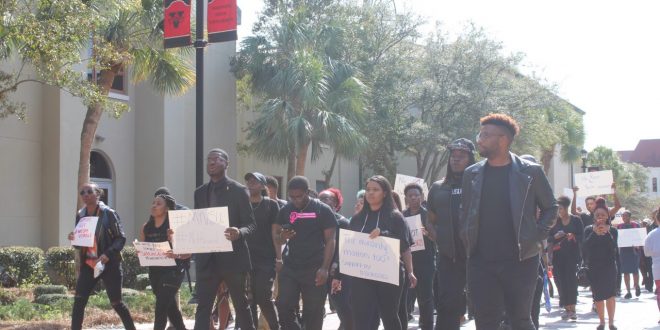 Students unite in hopes of change

What began as outrage from hateful speech written on a bathroom stall turned into a plea for equality.

On Friday afternoon, racial hate speech was found inside of Lowndes Residence Hall. Campus Police were alerted of the incident and began an investigation into the matter. The writings were not removed until Saturday, after several students took to social media.

The VSU Student Government Association released a statement on Friday to address the incident. They offered love and support to all students on VSU’s campus.

President Richard Carvajal was out of town during the incident and released his statement on Monday. He said he has personally felt the harmful effects of discrimination and said he was troubled by the act.

After the email was sent, Chad Capers, Black Student League president, and NAACP president Jasmin Martin organized a Monday night meeting. The meeting was set to gauge the general feeling of students after this incident in addition to the response of administration.

Throughout the course of the meeting students talked about VSU’s campus and why events like Friday’s continue to occur. Capers and Martin shared the difficulties they face as leaders when trying to speak with administration about problems facing black students.

During the meeting, the VSYOU campaign was brought up. It is a campaign VSU employed to raise admission rates and bring in more students. Students in the meeting felt as though the future students did not get a chance to see what it is like being a minority student on campus.

Students agreed there was a blatant under representation of minority students. Not just as African-Americans, but Latino and foreign exchange students were underrepresented as well.

A protest was proposed to demonstrate minority students are included in VSYOU as well. Once the matter was settled the students decided to go from the Student Union to the president’s office in West Hall.

The protest took place on Tuesday at noon. Students gathered at the Student Union and once the march got underway they were joined by more students and professors alike.

Once inside of West Hall, Vice President of Student Affairs Dr. Vince Miller spoke with students briefly and commended them for their actions. He also took to social media taking a picture of the protest with the caption: “Proud of our student’s for their impactful and peaceful demonstration. Everyone’s voice is important.”

Martin and Capers said it started with the Lowndes hall incident but agreed it went past that one act.

“It’s been several [incidents] within a year or two,” Capers said. “It’s becoming the norm and students are getting used to it. That’s not appropriate or okay, that’s not an okay learning environment.”

They said this is a response to the culture here that accepts slander and hate as the normality, but also it’s about getting administrators and other students to see what it’s like being a minority at VSU.

“We make the VSYOU Experience,” Martin said. “We put in numerous hours of work. Some of us don’t leave campus until 10 or 11 at night because we’re handling business for our organization and campus. Why are we getting overlooked as the students who make your university?”

Capers said he feels that the lack representation was a major point of the demonstration.

“Go to valdosta.edu right now and you wont see us,” Capers said. “We just want to be recognized as a part of this university and a part of this Blazer nation that we work so hard to put on events for.”

This is not the first time VSU has seen protest on campus. At the beginning of February, students marched through campus to protest the Immigration ban enacted by President Donald Trump.

Martin and Capers admitted that in the time they have been here, they’ve both participated in other protests. However, they said this one had a different feel to it.

“This allowed students to voice how they feel,” Martin said. [Students] went to administration and we’re forcing them now to give us a response. What are you going to do to fix this issue because now we’re going to tell everybody what’s going on here.”

For Capers, it was about the targeting of the VSYOU Experience that made it different.

“This [protest] was specific to the VSYOU Experience and us as students,” Capers said. “Before it was more of things that were happening like the Trump situation or stepping on the

flag.” This [protest] was specific to our experiences as paying students here and how we don’t think it’s fair. This experience is based off of us, the students, not them [administration].”

The two leaders met with Dr. Carvajal on Wednesday morning to discuss the agenda and goals for VSU’s minority students on campus. They said they were looking for change in Dr. Carvajal that other presidents have not shown recently.

“[Dr. Carvajal] waited too long, he needs to be aggressive and let students know I stand by you all and I do not support hate speech,” Martin said. “That’s what students want to know, their president is on their side regardless of the situation.

“This is an opportunity,” Capers added. “This meeting is not to hard ball him, it’s to make him aware and let him know that we’re no longer going to accept this as our experience.”

Martin and Capers agreed that demonstrations and protest come off as aggressive but it was necessary. They also are hoping the recent protest is the last demonstration that will have to be made.

“We do not want to be out here protesting about our experience, so let’s work on that,” Capers said. “We don’t want it to get this far. Let’s work on that, let’s have that conversation, let’s work together. Hopefully he’ll see it that way.”