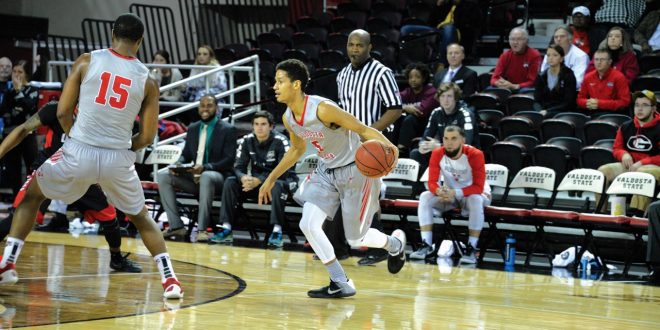 First place is up for grabs in the Gulf South Conference, and on Thursday, either VSU Basketball or Alabama-Huntsville will emerge with sole possession. It is the second matchup between the two teams this season, as the Blazers lost 82-72 to the Chargers on Jan. 2.

VSU, which was recently ranked second in the NCAA Division II South Region, gave up 50 second-half points to UAH, which is ranked first in the region, in the loss, dropping VSU to 3-2 in the conference. The Blazers went on to win 12 of their next 13 games, including a 10 game winning streak after the loss.

VSU surged to the top of the conference after the win streak, but the Blazers weren’t the only team streaking in the GSC.

Alabama-Huntsville has won 11 of 13 games since the matchup against the Blazers. The Chargers, like VSU, used their offense to storm through the conference and are atop the major offensive categories.

UAH is third in the GSC in scoring with an 84.9 points per game average. The Blazers lead the category with 87.5 points per game. The Chargers lead the GSC in field goal percentage with .489, while the Blazers are third with .480. Alabama-Huntsville leads the conference in three-point percentage with .422, and VSU is fifth with a .373 average per game.

Head Coach Mike Helfer stressed the importance of the game for seeding purposes in the GSC tournament.

“It’s an important game,” Helfer said. “With only four games to go, playing for first, this is where you want to be.”

The Blazers are currently tied with Alabama-Huntsville for the top seed in the conference, but the Chargers hold the tie-breaker because they beat VSU earlier.

Beau Justice and Marquis Simuels are both going into the game with the same mission: beat the Chargers.

“It’s still on my mind,” Justice said on playing Alabama-Huntsville. “We’ve only lost four games in conference play, and anytime you lose, it hurts. You definitely mark it on your schedule when you play them again.”

Simuels said he isn’t worried about facing the Chargers, and he thinks his teammates will be more focused this time around.

“In basketball, if you take a loss to anybody it’s going to be in the back of your mind,” Simuels said. “Not saying we are worried about it, but we’re going to be focused on what we need to do ourselves and not so much what they’re going to be doing.”

The Blazers lost the last away game they played when Delta State beat them on Feb. 4. The loss didn’t rattle the Blazers, as they came home to win two consecutive matchups against potential playoff teams.

“Sometimes you get knocked down and come back twice as strong,” Justice said.

Senior guard Josh Lemons is looking forward to the ending of the regular season and doesn’t think the team’s losses will affect the team’s play.

“Losses happen in basketball,” Lemons said. “We went on a 10 game win streak, and it ended. That’s basketball. We came home, we got our confidence back, we are playing our style of play and we’re just going to take it to Huntsville.”

The Blazers have eight seniors on the team. Down the stretch, Helfer leaned on their leadership and experience. With experience comes larger goals.

“I want us to play well and go as far as we can go,” Lemons said. “I want a ring this year, and I think that goes for everyone else here. Hopefully we can get there.”

The matchup with Alabama-Huntsville will serve as a warm-up for the postseason for VSU as well as the two following games against North Alabama and Shorter, who are both vying for a postseason bid.

The game against UAH is on Thursday at 8:30 p.m. in Huntsville, Alabama. Coverage of the game can be found on UAH’s athletics website.