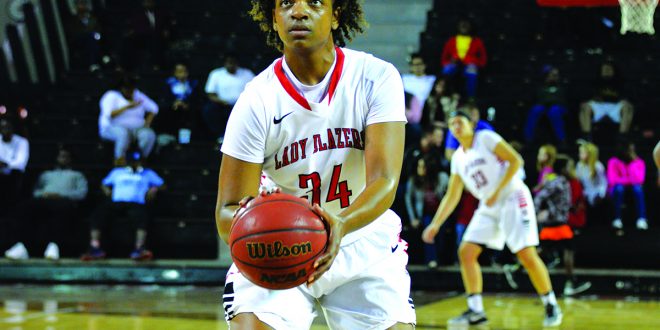 VSU Women’s Basketball must do one thing in order to host a playoff game: win a game.

The Blazers must at least split their upcoming games against Shorter and Lee University to join the men’s team at the Complex next week.

On Feb. 18, the Blazers took their seven-game win streak to Florence, Alabama, facing Gulf South Conference foe and potential playoff opponent North Alabama. The game resulted in a 70-52 loss for the Blazers, which is the team’s worst defeat of the season.

Head Coach Carley Kuhns will use the game as a learning experience moving forward for her players.

“I think it is definitely a learning opportunity for us, and I’m glad it came when it did as oppose to in the tournament,” Kuhns said. “From the jump I don’t think we competed like we do. I don’t think we defended like we usually do, and we we’re just a little bit out of rhythm and out of sync.”

The Blazers shot 22-64 from the field, which included shooting 2-20 from beyond the arc. They allowed 38 points in the paint and 22 fast break points on defense.

VSU may be without one of their leaders tonight against Shorter, as Aaliyah Cheatham was in a walking boot during practice on Tuesday after being injured against North Alabama. Cheatham leads the team in minutes played and free throw percentage and she is fourth on the team in scoring.

Sonya Franklin said the team will miss Cheatham, but they won’t miss a beat in the game.

“All of my teammates are ready and they’re more than capable of stepping up,” Franklin said.

Kuhns said, the players are going to have to change their mindset approaching the final two games of the regular season.

“Going into these next two games, we are going to have to have a bit of a chip on our shoulder,” Kuhns said.

The Blazers’ two remaining games are against teams they struggled against on the road. On Jan. 9, VSU fell to Shorter 70-63, where the Hawks scored 19 fourth-quarter points to win the game.

Shorter is in the midst of a five-game losing streak and have been eliminated from post-season contention. They could, however, hurt the Blazers’ post season standing with a victory in Titletown tonight.

VSU will be facing Lee to close out the regular season on Saturday. The Blazers are currently tied with them for second place in the GSC. When the two teams played earlier in the season, the game ended on a last-second buzzer beater by Franklin, which won the game.

Franklin said the team’s losses motivate the Blazers to be better, and she expects this to be no different.

“Our losses make us realize how much better of a team we are,” Franklin said. “We’ll lose and realize that we are a better team than how we played that game. That’s how we get our momentum.”

Franklin also said the loss at North Alabama won’t change the fact that the Blazers do have fun on the court together.

“We’ve lost before,” Franklin said. “We lost before we went on our streak. You win some you lose some. That doesn’t change the way we feel about each other.”

VSU will play Shorter at the Complex tonight at 6 p.m.