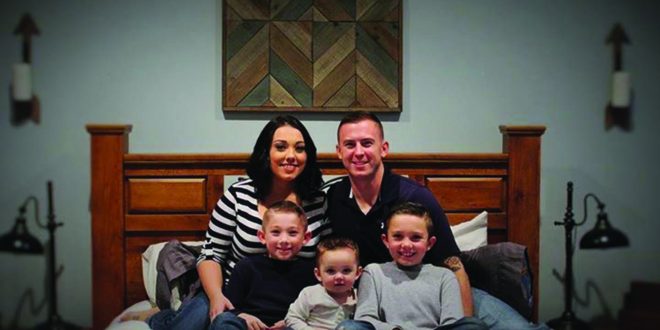 Many students at VSU find it hard to balance getting good grades, making it to work on time and balancing a social life. Some students, however, have one more important responsibility to handle: parenting.

Stephanie Oliveira, 20, is an early childhood education major at VSU. Her son Jonathan is 4.

Oliveira said that when she first found out she was pregnant she couldn’t believe it, and she was terrified and didn’t know what to do or who to talk to.

“Obviously, when you’re 15 you don’t plan on getting pregnant; people make mistakes and I chose to deal with my situation,” Oliveira said.

Once she told her family, and Oliveira’s little brother was excited to be an uncle, she said her whole perspective on the situation changed, and she felt she could handle it better.

Oliveira said being a mom and a full-time student is not easy, but she explained that her son is the reason she started doing better in high school, and he motivated her to go to college to make a better future for the two of them.

Having a support system can make a huge difference on a day to day basis.

“He goes to daycare during the day, but my mom and brother watch him too, while I am at school,” Oliveira said.

Some times are harder than others. Trying to balance everything, sacrifices have to be made to make sure things gets done. Oliveira said she almost failed a class last semester because the work load was so intense she barely had time to do much else.

“It’s hard when you have to choose between an assignment due at 12 a.m. [midnight] and spending time with your child, but sometimes you have to tell yourself it’s for the best and do what you have to,” Oliveira said.

Oliveira said sometimes it’s hard to accept the fact she’s missing important things in her child’s life due to her education, but keeping a positive outlook on it can help. She knows, one day, her son will understand and appreciate all she’s done for him.

“I wouldn’t change a thing when it comes to being a mom because at the end of the day, my son is the reason for everything I do, and he inspires me every day,” Oliveira said.

Oliveira plans to graduate fall of 2019. She then wants to attend graduate school to become a Spanish professor.

Another student, Mckenzie Swader, a junior social work major, had her son, Jackson, when she was 17. Her anticipated graduation date is May 2018.

Swader said the hardest part about raising Jackson was going through the newborn stage. Even though she considered him to be a “good” and “easy” baby, it was hard to juggle catching up in school and getting enough sleep.

“Watching him grow and [watching] his personality develop were the best aspects,” Swader said.

Swader said she has a great support system for her child. Along with her mom, sister and boyfriend, she found two reliable babysitters. Her son stays at preschool in the morning and then daycare in the afternoon.

“I had to do my schedule around his schedule, which meant I may not get the professor I want and have to settle for one who doesn’t have as good of rating as the one I wanted,” Swader said.

Swader also said time management is very important in order to balance school and parenting. She said she would do her homework when her child was taking a nap or when she was away at school.

Swader used to work at a daycare, which offered its benefits, as she was near her child and received discounted childcare.

Now, Swader decided to take a step back from work and focus on graduating and being a mom. Her boyfriend, Josh, supports the family.

Jackson’s biological father signed his rights over to Swader, and he is no longer in the picture. Swader said Josh became a prominent father figure in her son’s life.

“He’s a contractor for the military and works hard, so I can stay at home and focus on school and spend more time with Jackson and not be so stressed,” Swader said.

Joseph and Kara Crotty, a couple in their late 20s, are pursuing nursing degrees at VSU, while raising three children.

Their two eldest sons, Logan, 8, and Daxton, 7, attend school during the week, while Parker, their 17-month-old, goes to daycare.

Joseph and Kara always try to pick up Parker as soon as they get out of class. Since Parker is the baby of the family, Joseph and Kara enjoy picking Parker up together and watching him play with the other kids.

Kara said they typically study two to four hours at night, after their sons have been fed, washed and put to bed. On weekends, they make time for family throughout the day then go back to studying.

The Crottys had to put their academic careers on hold until their eldest sons attended school full-time. They both have to sacrifice study time in order to make sure their children’s needs are met first.

Kara said finding the best study schedule has benefited them a lot as parents and allows them to have enough time with their sons. She explained that they have time for family but also time for themselves. They also said asking for and accepting offers of help can go a long way.

Kara said being nursing majors, they are assigned clinicals, which they have to do in order to pass their class. She said sometimes they can’t work around them and end up having to move things around, so they can attend them.

“Talk with professors, they are and have been a huge help with us and working with our specific needs because of our circumstances with children and both being in the nursing program,” Kara said.

Joseph and Kara’s anticipated graduation date is May of 2018. Joseph plans to continue his career in the military as an officer and nurse and then pursue a Master’s degree in nursing. Kara either wants to continue the same work as her husband, giving back to those who have sacrificed so much, or find a job as a civilian in her desired field of nursing.

Previous What’s strange about the Johnsons?
Next 2017 Best Places to Live