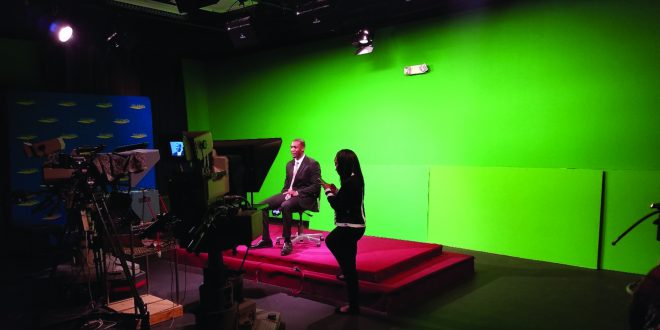 Eighteen years ago, the city of Valdosta received its own news station, and since then, it has been the only Valdosta-based news cast in South Georgia.

Head of the program, Professor Frank Barnas, runs News Valdosta, along with the students, providing local news to the community.

“By default, the students working here are the news station that is based in Valdosta and covers all news locally,” Barnas said.

Barnas said the focus is local news because when students get jobs, they are more likely to get the local news openings.

According to Barnas, the station’s format is not constant. It has varied from being 30 minutes with one issue per show or doing a longer form documentary during the week. This semester, Barnas is focusing the class around five minute updates.

“The format shifts, but it’s always News Valdosta in some intonation,” Barnas said.

In terms of benefiting students, the program provides students enrolled in the class the ability to gain experience in anchoring, technical directing, floor directing, audio, producing, writing a teleprompt and on-camera experience.

“It has helped me to become a better anchor/ host,” Jessica Thompson, a senior, said. “Sometimes I get nervous, but overall it has been a fun experience.”

Since nearly everyone in the class is a mass media major, these students are given a real look into what they are going to be doing in a few years.

“It allows me to be comfortable and make my mistakes now, so when I apply for a job I know what I can or can’t do,” Khambreal Williams said.

While the students get to experience what equipment they’ll use, they also get to know what it’s like to work with a real news team.

“It’s a unity thing, and if one person makes a mistake, the whole show is off,” Williams said.

In the past, News Valdosta won several awards, ranging from regional to national awards. Currently, the station has won 28 awards, including Best News Cast in the Nation.

News Valdosta is shown on VSU TV, which is Mediacom channel 16 and available through On-Demand using Mediacom Digital Cable.

Previous VSU breaks records on way to second round
Next Suchon: raking through the GSC