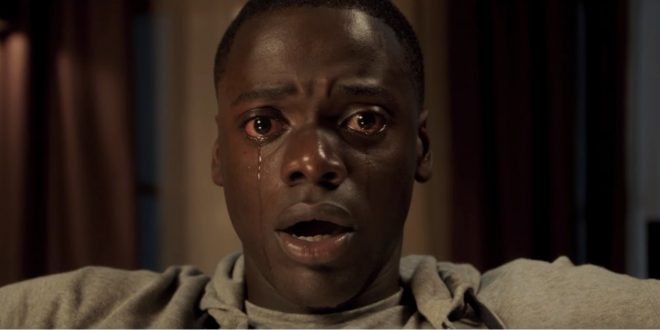 “Guess Who’s Coming to Dinner” meets “The Stepford Wives” in Jordan Peele’s directing debut movie “Get Out.” This satirical movie effectively combines his comedic side with his perception of a white and black relationship.

The racial dynamics are prominent in this film, as they reflect the discrimination and disapproval of an interracial couple. The movie starts off by introducing the main characters Chris, Daniel Kaluuya, and his girlfriend Rose, Allison Williams. Chris is an African-American male who decides to take a trip with his girlfriend to her parents’ house for the weekend. Chris is nervous to meet his girlfriend’s parents because she never mentioned Chris’ ethnicity.

As soon as Chris meets the parents, he displays an uncomfortable character, but the parents welcome Chris in a pleasant but awkward way. As the weekend goes on, Chris’ suspicion rises, as he notices the strange behavior of the family’s two black servants.

The plot thickens after Rose’s dad reveals that his wife is actually a hypnotist, and she performs her treatments in the house. After receiving that information, Chris begins to notice weird behavior from everyone he meets.

Peele successfully demonstrated his attitude toward white power. He didn’t want to attack anybody for their race but wanted to bring awareness to those who profess their lack of racism. Peele wanted his audience to acknowledge that Chris’ minority status made him feel more exposed in that environment.

Peele wanted to make sure the movie didn’t come off as just racially profiling, so he knew when to insert comedic moments. The comedy comes from Chris’ best friend who is a TSA agent, LilRel Howery. The timing was perfect. Just when your anxiety was building up, Peele cuts the tension with comic relief.

The movie is definitely a conversation starter that could possibly leave some viewers uncomfortable. Peele did a great job creating a twisted thriller that challenges white privilege, while placing real issues in absurd context.