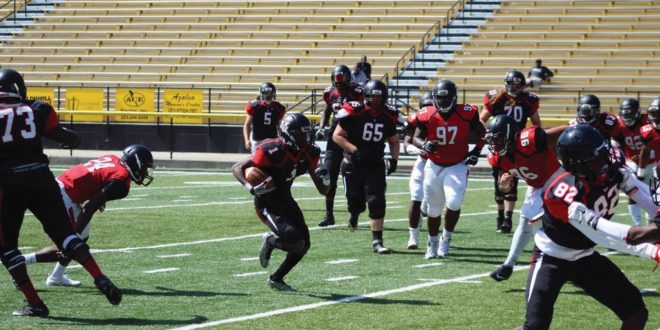 Because returning starters were black and blue, the 2017 VSU Spring Game featured Red and Black teams with a lot of young players.

The Red team won the game 38-28 after two scores from upcoming junior Stewart Spence, who transitioned to offense this spring after playing linebacker last year.

Last year’s starters, Dallas Baldner, Roland Rivers, Cedric Hollingshed and Donte Robinson did not participate in the game. Their absence made way for players that redshirted last season or did not receive notoriety to get a chance in the spotlight.

Wells controlled his offense with ease, balancing the run and pass game, while keeping the Black team’s defense off balance. Wells said his success can be attributed to his time in practices this spring.

“This spring I’ve been getting a lot of reps,” Wells said. “In the beginning I was nervous but as the game progressed I was calmer.”

Wells said he attributes his confidence to his teammates, more specifically to Robles.

“We sit next to each other in the locker room, and we try to pump each other up,” Wells said. “We tell each other what we need to work on.”

With GSC Offensive Freshman of the Year Hollingshed not playing, other VSU running backs got a chance to display their skills. Isaiah Johnson made the most of his opportunity, scoring two touchdowns before spraining his ankle and having to leave the game in the fourth quarter.

Johnson was modest in his response, and he gave senior running back Jordan Germany credit for providing him with inspiration.

“I think I played pretty good for my first scrimmage,” Johnson said. “Guys like Jordan motivate me every day. They make sure we are all good at all times.”

Head Coach Kerwin Bell made note of the talent that his players showed. He said he is already looking forward to the impact they can make on the 2017 season.

“We’ve got some good young talent that we redshirted,” Bell said. “For some of those guys like Isiah Johnson, we’ve liked what we saw all spring, so now it’s time for him to show what he can do. It’s going to really help us next year as we go into the fall.”

Going into the fall a lot of Blazers have lingering injuries. The Blazers will get the month of May off before having to report to camp at the start of June.

Summer camp for the team will feature the 31 new freshman recruits as well as other players who could not participate in spring practice. Building chemistry isn’t a concern for Bell. He said he will focus on changing gears and pulling the best out of his players.

“Going into the second phase of our offseason, we have to get everyone healthy,” Bell said. “We hope to have everyone cleared by June 1, and we’ll start workouts on June 5. Then we have eight weeks where you can really separate yourself.”

Even though VSU will lose a lot of players, especially on the defensive side of the ball, Bell said a good summer will help the team improve on their 8-3 record last year.

The first opportunity to for the Blazers to improve will be on September 2 in Albany, Georgia, where the Blazers open their season against Albany State University.