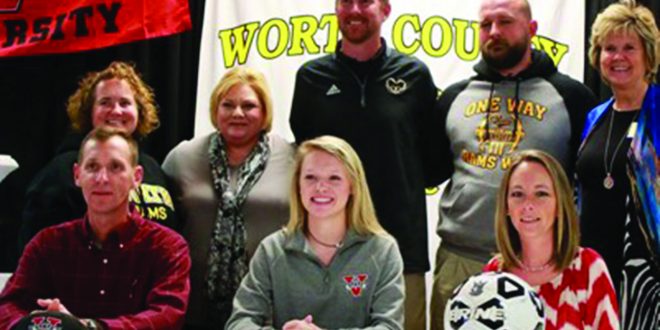 The 2017 signing class was mostly recruited by former coach Rebecca Nolin, but Andrew is a big part of why the recruits stayed at VSU.

“A lot of the recruiting is done in advance; for example, we are already looking at juniors for the 2018 class,” Andrew said. “We try to stay one class ahead, and we look at club games, school games and any other related activities that involve the sport.”

Andrew said he uses the campus to recruit players.

“Outside of soccer, we try to get them on campus, have them come to games and visit games, so they can get a feel for Valdosta and what it has to offer,” Andrew said.

The players are recruited on their academic abilities as well as their personality in addition to their on-field ability.

“I was playing in a tournament game when one of my coaches contacted their graduate assistant and coach,” Riley Tennant, a sophomore midfielder, said. “From there, we kept in contact, and it just worked.”

Andrew is bringing in players at an assortment of positions for the 2017 season.

Haille Paterson is a forward from Coral Shores High School in Key Largo, Florida, while Jamey Medders from Sylvester and Madison Mascheri of Lake Mary, Florida, are defenders. VSU is also bringing in goalkeeper Caroline Embler from Anderson, South Carolina.

Medders said she chose to come to VSU because she fell in love with the VSU community.

“[Coach Nolin] did some training sessions with my former travel soccer team out of Tifton,” Medders said. “I love how close the team is with one another, and I feel that I’ll fit in well.”

She said she hopes to get some playing time in the fall.

“My goal is to be an all-around better soccer player,” Medders said. “I plan to work hard and try to earn a spot in the starting 11. I also hope to make an impact on and off the field by supporting my team.”

One gaping hole for VSU is in goal. The Blazers’ lone star last year was Alyssa Curtis, who got VSU’s single-game save record last season. The team currently has no backup for Curtis.

“We are really excited about our goalkeeper coming from South Carolina this upcoming season,” Andrew said. “She will compete with our senior goal keeper for the starting position.”

The new recruits will join the team in the summer in an effort to get acclimated to collegiate soccer both physically and mentally.

“Sometimes with freshman, they struggle their first year because college is a lot more physical and a lot faster than high school and club,” Andrew said. “We make sure they qualify in all areas so that we are not only recruiting good players as well as good people.”

Tennant said she thinks the new players will benefit from doing some extra training before they arrive in Valdosta.

“I would tell the girls from the incoming class to work out and come in pretty fit,” Tennant said. “We all work out together, so they shouldn’t stress but just stay focused.”