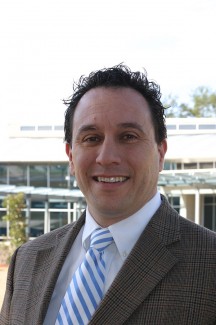 Dr. Rodney Carr will be returning to his alma mater in July as the new vice president of student success.

For Dr. Carr, this is more than just a job, but the opportunity to transform students’ lives at an institution that has been there for his family during tradgedy.

Since his position is in a fairly new area, he addressed how he is going to help the Student Success department grow with a simple metaphor.

“It’s a new kind of area,” said Dr. Carr. “….we kind of talked about it being like clay on a potter’s wheel. We are all going to spend some time putting our hands on that clay to mold it like we want too.”

Dr. Carr added that the retention rate is a key component for his job in student success.

“Your incoming class is increasing and getting larger each year which is a rare anomaly in the state of Georgia south of Macon,” Dr. Carr said. “A lot of the colleges are doing some different things and trying to come up with a common vision, and working with those colleges on what we can do, what their efforts are and how they are going…. is one of the key initiatives that we can come up with.”

VSU is not an unfamiliar place to Dr. Carr. He received his master’s degree in Public Administration here and his daughter earned her undergraduate degree in athletic training at VSU. So, when the opportunity came up to apply for the Vice President of Student Success, he gave no hesitation.

“It’s one of those things, I kind of get picky about where I’m choosing to apply to and so I had some experience with VSU,” Dr. Carr said.  “I know there is a lot of passion in people and great people who work there, so I was excited to see that opportunity come up.”

With 28 years working at multiple universities in the state of Georgia, Dr. Carr’s work in student services and academic affairs began at the age of 19. He started at West Georgia College where he met his wife and where, one could say, his story began.

“I’m a firm believer in ‘everybody has a story’,” Dr. Carr said. “I’ve got one just like everyone else has one.”

Dr. Carr started off in law enforcement, so there have been several career hurdles along the way. He said that the greatest obstacles were “created by himself.” Though, he has always listened to two of his former bosses who influenced him to aim higher and surround himself with good people.

Dr. Carr said that one of his bosses has always told him “to aim higher and don’t settle for where you are.” This motto and his boss’ encouragement pushed him to go to graduate school and get into administration.

“It’s not always been very easy, but it has always been very rewarding,” Dr. Carr said. “People tell me, ‘I just don’t understand how you do it’ and I tell them, ‘Its children that are looking for somebody to give them a secure and safe place and give them unconditional love.’”

Their oldest daughter, who graduated from VSU, just completed graduate school and is working with the Houston Clinic out of Columbus, Georgia. During her time at VSU, a tragedy struck their family which resulted in VSU taking measures to help.

This tragedy and the way VSU approached the situation was a main reason as to why Dr. Carr chose to work at VSU.

“…our daughter, while she was about to start her senior year, was dating a young man at VSU, and he was killed in a car accident a week in a half before classes started,” Dr. Carr said. “And so seeing her get out of a car and walk to the campus a week later was really, to me, amazed at how strong she was. And I thought to myself ‘I hope one day I can be like her’. Although, it wasn’t my child that was lost, watching your children battle that and watching Valdosta State’s response really got me excited when this opportunity came up.”

Their middle daughter is in college at the University of West Georgia, which causes a bit of a struggle for their family since they are fans of the VSU Blazers.

“So now there is a little struggle in our house, because she is at the University of West Georgia and so I told her ‘Sorry, we can’t cheer for you anymore,’” Dr. Carr said laughing.

According to Dr. Carr, their 16-year-old son is extremely interested in attending VSU as well.

After working at West Georgia College, Dr. Carr worked at Polytechnic State University, which has now be consolidated with Kennesaw State. From there, he worked at Middle Georgia State University and then to Bainbridge, where he served as Vice President of Student and Academic Affairs. Now, he will relocate to VSU with his family.

In addition, the faculty at VSU is excited for Dr. Carr to begin his new position. Dr. Richard Carvajal, president of VSU, said he is thrilled to add Dr. Carr to the team.

“He brings a proven record of success from multiple institutions in our University System, and he has built a reputation as one of Georgia’s best higher education leaders,” Dr. Carvajal said. “In particular, he brings tremendous experience in leading efforts to increase retention, progression, and graduation numbers, and I look forward to the difference he will make in those areas.”

Dr. Carr said that he will always have an open door and wants to be able to listen to the voices of the student body.

In turn, Dr. Carr’s main focus is on helping students at VSU and listening to their stories.

“Everyone has defining moments in their lives,” Dr. Carr said. “There’s over 11,500 people there that are students that have stories to tell and how VSU has challenged them and changed their lives. That is one thing that I am excited about is being able to tell people’s story.”

Previous Volunteering: the cure for summer blues
Next Hamilton signs with Dodgers