Home / Sports / Get in the know: VSU sports staff changes 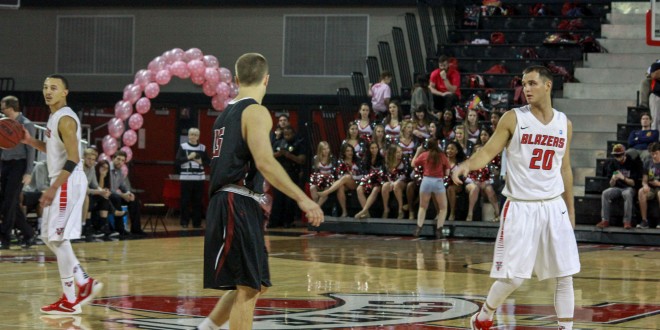 Get in the know: VSU sports staff changes

Staff changes were not in short supply over the summer. Here’s a recap of what you might have missed.

Jennifer Grubbs, former assistant coach for the women’s basketball team, transitioned into a new role with Blazer Athletics. Grubbs accepted the Director of Student-Athlete Development and has been working in that position since July. Grubbs is one of the longest tenured staff members, and she will be able to directly work with athletes on skills beyond the court or field.

Jay Johnson was named the Head Athletic Trainer over the summer. Johnson stepped into the role previously held by Russ Hoff for 20 years. Hoff is transitioning to become a full-time faculty member in the Department of Health Sciences within the College of Nursing and Health Sciences. Johnson is a graduate of VSU’s graduate program, and he was a part of the athletic training staff for the 2004 national championship team. Johnson brings 10 years of experience as the Head Athletic trainer to the Athletic Training Department. He took over his new role in July.

Chandler Merkerson will be moving into Grubbs prior role, assistant coach for women’s basketball. The Florida native got her coaching start as a graduate assistant with Lincoln Memorial in 2014. Her success led to her earning a full-time position at Truett McConnell during the 2016-2017 season where she helped coach the team to the most wins in program history. Merkerson’s help boost every program she has been at. She will strive to continue that trend at VSU.

Jason Mays, former assistant basketball coach for the men’s basketball team, took a position at Kentucky Wesleyan College. Mays will have the same role as he did at VSU, but he will be working with head coach Happy Osborne. The two worked together at Georgetown College in Kentucky prior to his stint at VSU. Mays helped coach the Blazers to a 26-6 overall record and regular season GSC title in 2017.

It was a homecoming of sorts as former Blazer, Blake Justice, was named as the new assistant coach for men’s basketball. Justice is a member of the 1,000-point club and played with VSU for three seasons. Justice served as a graduate-assistant for the Blazers before having a brief stint playing overseas. He will be making the transition from the court to the bench as the Blazers enter a rebuilding period. Seven seniors graduated from the men’s basketball team including four starters. The lone starter remaining is Justice’s younger brother, Beau.