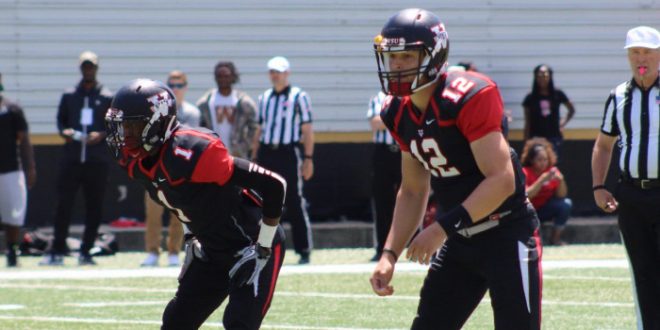 Adam Robles (right) is leading the No. 11 team in the nation this year. The Blazers will have their first test on the road against Albany State.

Robles fuels the flame during preseason

Last season, Adam Robles entered the year as a transfer player who wasn’t sure how much playing time he’d get. This season, he’s the starting quarterback for the No. 11 team in the nation.

Transferring from University of South Florida, Robles said he came to Valdosta because of the opportunity to play for head coach Kerwin Bell and his quarterback friendly offense.

Robles was also very intrigued by Bell’s reputation at Jacksonville University with an offense known for scoring a lot of points.

Robles said Bell sat him down and talked about offensive philosophy. He also discussed Valdosta’s assorted football tradition before coming to Valdosta.

“My job is to make everyone around me better, to make the offense run and to make the team score points,” Robles said. “My only goal is to win every football game one week at a time. As long as we win the game, I believe I’ve done my job.”

Robles is not the only one confident in his game. Freshman safety Decary Croaker saw the work Robles put in during the offseason.

“Adam has been working very hard this summer and what I think everyone should expect from him, is touchdown after touchdown in all games,” Croaker said. “I don’t see very many quarterbacks that work on their game the way he did this summer.”

Robles is thought of highly around the Gulf South Conference. He was one of two quarterbacks selected as preseason All-GSC. He was one of three Blazers to be selected on the offensive side of the ball.

“Our fall camps have been great,” Robles said. “Everyone’s been working hard and getting better. The competition level compared from this year to last year has been phenomenal.”

Offensive linemen Kyle Duke is responsible for protecting Robles from the other team. He knows the caliber player Robles is and appreciates it.

“Adam is a passionate team leader,” Duke said. “If you are ever down in the 4th quarter, he is the man you want in the backfield trying to lead you to victory. He’s got your back even when you are the one protecting his.”

Robles has set high expectations for himself. Going into the season as the No. 11 team in the nation means his every move will be under the magnifying glass. This season, he knows what the deal will be from the start.

He’ll get his first look at competition against Albany State on Sept. 2 in Albany, Georgia.

Previous SGA adds familiar face to its ranks
Next Kicking and Screaming: Blazers preparing for match with Rams