Home / Sports / All about the Benjamin’s 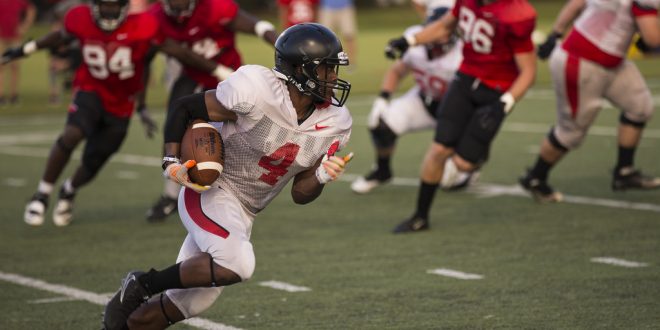 All about the Benjamin’s

The reign of Kenny isn’t over for VSU Football. With the departure of star cornerback Kenny Moore to the New England Patriots, a new face has risen in the ranks. Kenny Benjamin, a freshman wide receiver from Fort Myles, Florida, performed well during the spring and fall football camps.

He previously played for Dunbar High School under coach Sammy Brown, leading the Tigers to a 9-3 record while tallying 31 receptions for 558 yards and six touchdowns.

He had the advantage of coming to college in the spring and had a full offseason to train with the Blazers.

“So far, it’s been good,” Benjamin said. “It’s a process, coming out here competing. It’s a big transition, but I’ve been having a great time.”

Benjamin had a strong showing in inter-squad practicing, but his first look at an opponent will come on Saturday against Albany.

“The nerves are out,” Benjamin said, adding that after all the competing throughout the offseason, he feels that the team is collectively ready. “It’s going to be a show.”

A quick receiver like Benjamin will have the opportunity to flourish in the offense of Kerwin Bell. Bell likes to run a high tempo system that keeps defenses off balance.

Bell isn’t the only person with high expectations. Senior wide receiver, Dallas Baldner, has taken notice of Benjamin’s offseason performance and is expecting him to be an asset to the offense.

“He showed out in the spring, came in fall camp and has been making a lot good plays,” Baldner said.

With Baldner being a four-year player for the Blazers, he understands that the actual game pace will probably be faster than Benjamin is used to.

“[Kenny] thinks he has it down right now, but the game is a lot faster once the lights turn on,” Baldner said.