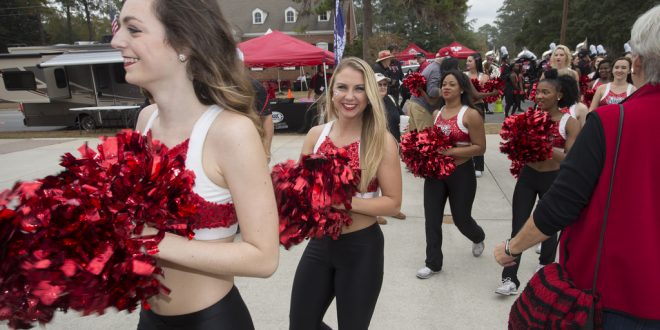 After bringing home another national championship, the Red Hots are ready to sizzle. Being the reigning champs from the Division II Hip Hop competition at the National Dance Association championships, the VSU Red Hots have something to uphold going into the season this year.

“Returning back this year with a national title is absolutely amazing,” second year dancer Jordan Fortick said. “Just knowing that all of our hard work paid off is like no other feeling. Winning that title gave us the positive boost that we needed. Of course, there’s always more work to be done, but knowing that we are capable of achieving and reaching that common goal makes all the work worth it. This team can only go up from here.”

The team consist of 20 girls, 12 which are newcomers to the VSU dance program.

, “To anyone new joining the team, I would say get ready for the craziest ride of your life,” Third-year dancer and senior captain Samantha Cohen said. “The Red Hots are no joke and we work hard to look good at everything we do.”

Taking from May to July off after last season, the Red Hots returned the beginning of August with pre-camp practices to start the season off.

“Our pre-camp practices went really well. The team came together pretty fast and bonded through hard work to look the best we possibly can at camp,” head coach Kelli Fields said.

They also attended the National Dance Association collegiate cheer camp which was held in Myrtle Beach, South Carolina for three days in August.

“We had a great experience at camp,” Fields said. “We brought back lots of game day routines to use during the season, as well as winning first place in team dance and wining a silver paid bid to nationals.

Immediately after returning from camp, the team began their official practice schedule which consist of two and a half hour practices three days a week and 6:00 a.m. workouts with the team trainer twice a week.

“Practices have been going pretty smooth,” Fortick said. “Of course, there will always be some tough practices, but those practices only make us better. The atmosphere is so positive at practices and everyone works so hard.”

Typically, the team learns a new dance on Mondays and reviews routines that have already been taught as well. On Wednesdays, they review some more and learn sidelines dances for games. Once competition season officially begins, the team will start focusing less on game day routines and more on the competition routine.

“Starting off this season with our national title from last season has given us so much more motivation for this year,” said Cohen. “There’s nothing easy about all the hours we put in and the work we do year after year to receive such an amazing recognition. It’s an awesome feeling when you realize that all of the work was worth it.”

Coach Fields, who has choreographed the jazz routine before, will do so again this year and Siara Fuller, out of North Carolina, will choreograph the hip hop routine.

“This will be out fourth time using Siara for our hip hop and we love her choreography. It truly fits our team and has been a big part of our success,” Fields said.

With nothing but opportunity ahead of them, the team recognizes some of the strengths and weaknesses and they already have a plan for how to tackle them when the time comes.

“I would like to see this team be a little more aggressive in their performances,” Fields said. “They are great dancers and I want them to dance with confidence to give each performance that ‘wow’ factor.”

As the nationals slowly approaches, the team has already set expectations and goals for the season ahead. Nationals are scheduled to be in Daytona, Florida on April 4-8 of 2018.

“Of course, we want to win another National Championship, that goal will always be on the top of everyone’s list,” Furtick said. “This year we’ve been so fortunate to gain some pretty awesome and talented rookies. We all look forward to growing as a team and dancing as one.”