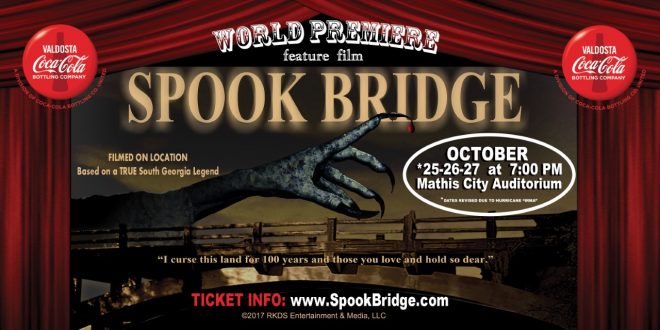 ‘Spook Bridge’ to premier in Valdosta

Valdosta’s urban legend will come alive with the premiere of ‘Spook Bridge’ produced by RKDS Entertainment and Media. The horror film will be screened in Mathis City Auditorium on Oct. 25-27 at 7 p.m.

The film is based on Spook Bridge, which is an abandoned columned bridge located on the county line between Brooks County and Lowndes County, Georgia. For decades, the bridge has served as the center of urban legends and small-town curiosity in the nearby cities of Quitman and Valdosta.

“In 2012, while filming ‘Battle of the Cursed’, the scene was so creepy and the atmosphere was so spooky that I told the director Doug Sebastian to leave this footage out of the film as I want to make a movie about this bridge one day,” said Kirkland.

According to Kirkland, the bridge has developed a reputation as a popular hangout for teenagers and is rumored to be haunted because of it’s isolated and overgrown surroundings. The reputation is further supported by rumors of murders, animal beheadings, witchcraft and devil worshiping.

There are 10 leading actors and over 200 people involved in the production of the film. One of the lead actors is Domenick DeFrank, a VSU student playing the role of Ryan Smith.

DeFrank said that he was originally playing a small role in the film until he had to do a script read-through.

“How I got this role is actually extraordinary in my opinion,” DeFrank said. “Roy Kirkland wanted me to play a different smaller role. When we did a script read-through, Roy actually told me he wanted me to play Ryan instead, basically trading my role to somebody else.”

“Filming ‘Spook Bridge’ was absolutely great,” DeFrank said. “I had fun, but it was hard work. There was one scene that my character seemed to be deprived of sleep, so I didn’t sleep the night before to make sure my character was how he was supposed to be.”

‘Spook Bridge’ was filmed in Brooks County and Quitman, Georgia and includes scenes dating back to the 1870s, 1916 and to 2016. The film also includes scenes from the inside of the Brooks County Courthouse, Kingfisher Plantation, the Old County Jail, The Quitman Free Press, Neely Service Center, Royal Cafe and Downtown Quitman.

The film took four months to film and six months of editing, which mainly focused on including the special effects.

“Spook Bridge is the creepiest place I have ever visited in my life, and I have no desire to revisit,” Kirkland said. “I love the look and history of it but still no desire to return.”

Kirkland and Sebastian have also produced five other films, two of which have received national attention. Their first movie, ‘And There You Are’, was on Netflix for two years, and they won a Best Documentary at the New York International Film Festival.

Tickets to watch the film are $10 and will include unlimited soft drinks and free popcorn. The premier will also feature a red carpet event where people can stand in front of the films back drop and take photos.

EDIT: Due to Hurricane Irma, the premier has been postponed to take place in October.  Mathis City Auditorium will function as a fall-out shelter in the weeks following hurricane Irma.