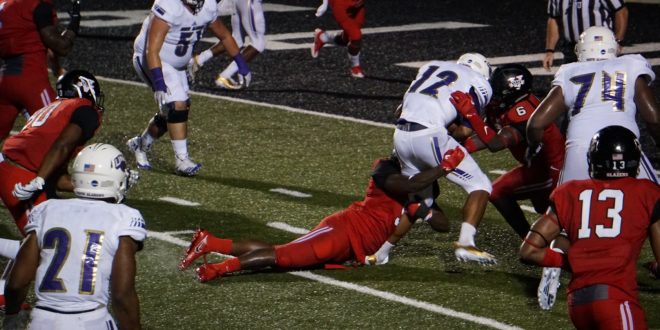 The Gulf South Conference Game of The Week and the best football rivalry in the GSC proved to be just that as the Blazers drop their home and conference opener against UNA 30-24.

The Blazers faced an uphill battle early in the contest by spotting the Lions a lead in the start of the first quarter. UNA gained good field position from the opening kickoff and wasted no time by scoring off their first four plays, taking a 7-0 lead within the first two minutes of the game.

After getting a feel for the game the Black Swarm started to come up big on numerous occasions. Defensive end Josh Ealy recovered a deflected pass in the backfield and took in for a touchdown to tie the game 7-7, before entering the second quarter.

In his starting debut, freshman quarterback Rogan Wells was the entire offense for VSU. In the first half with 10 carries for 48 yards, and completed on 6 passes for 30 yards. However, the offense just couldn’t form a drive to put points on the board, and the Blazers trailed 14-7 at halftime.

The Blazers came out of halftime on a mission by running the ball with Wells and senior tailback Jordan Germany. VSU ended their first drive of the half with a Wells rushing touchdown, tying the game 14-14.

Throughout the game the Blazers repeatedly plagued themselves with penalties that hindered drives or bailed out UNA’s offense. The Blazers collected 11 total penalties that resulted to 127 yards against them.

The teams continued to trade possessions until UNA scored another touchdown late in the third quarter to take a 21-14 lead. On the very next drive Rogan Wells got hit late on a roughing the passer penalty and was taken out of the game due to an apparent shoulder injury.

To start the fourth quarter Adam Robles took over the quarterback duties. On his first snap of the game, Robles threw an 18-yard touchdown to wide receiver De’Sean Blair to tie the game 21-21.

The Blazers defense continued to show that they’re an impact on the field by forcing more turnovers. Defensive back Brandon Roe picked off Lions quarterback Rico Burton and returned it to UNA’s three-yard line. The takeaway resulted in three points as the Blazers were stuffed at the end zone and were forced to kick a field goal. On the next drive the Lions matched the Blazers with a kick to tie the game 24-24.

Robles took the field again in the fourth quarter and opened the drive with an pick-six to make the game 30-24 Lions, after a blocked PAT by Iseoluwapo Jegede.

After going three-and-out on their next offensive possession, the Black Swarm followed the trend of the night and forced another turnover.

John Marvin intercepted a UNA pass and gave the Blazers the ball back. However, the Blazer offense couldn’t take advantage of the good field position and had to punt the ball away once again.

The Blazers were given one last opportunity after the Black Swarm forced UNA to punt with time dwindling in the fourth quarter.

The Blazers got the ball on their own one yard line with a minute in the game and no timeouts. VSU quarterback Adam Robles connected on four out of his eight attempts, traveling 62-yards to North Alabama’s 37-yard line. Robles made a final heave for the end zone that was picked off by Lions defensive back A.J. Bracey as time expired to end the game.

Though given life from the defense towards the end of the game, the Blazers offense couldn’t produce a game winning drive. In a physical game the Blazers couldn’t prevail, but hope to only come back stronger next game.

“All I asked was just give me your best and they did,” Blazer’s head coach Kerwin Bell said. “They played extremely hard, our defense kept us in it the whole time. It’s been an unusual three weeks, but I told my team it’s not how you start. Great football teams come from going through tough adversity, this is going to make us a better football team. I hope this is really going to propel us to learn how deal with adversity, and now we just have to find a way to win.”

The Blazers are now 0-2 on the season, and 0-1 in Gulf South Conference matchups.

Next week the VSU Blazers will travel to matchup against another conference rival, the 2-0 West Florida Argonauts.