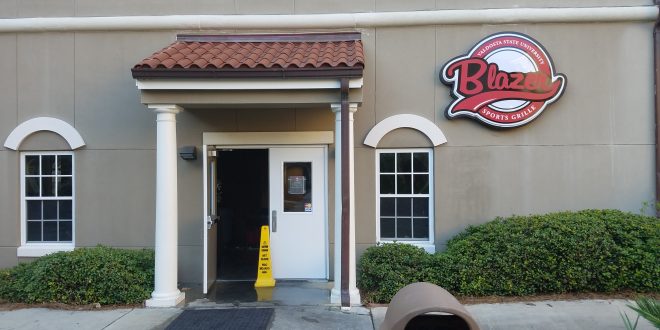 Flooding causes Blazer Grille to close for the night

Wednesday, a major water leak occurred in Hopper Residence Hall right above the Blazer Grille, which prevented it from opening. VSU dining services used Twitter to apologize and notify that the grille will be closed for the night. Fortunately for students, Palms Dining Hall was open until 9 p.m.

VSU contacted Servpro Valdosta, a water damage restoration service, to assess and fix the damage that came about.

General Manager of Servpro Valdosta Chris Spain said that the reason for the water leakage was a toilet pipeline that burst. Spain also said that since no one had been in the building all day, water could’ve been leaking since earlier in the day.

“It probably happened this morning when the student in the dorm room above went off for the day,” Spain said.

Sophomore Resident Assistant Hailey Bryan said that when she left her room for class at 3 p.m. her room was fine. When she returned to her room, it was flooded with two inches of water.

“When I got the text, at first, I was in disbelief and I just kind of stood there,” Bryan said. “I hadn’t even seen my room at that point and I was like this is real. This is really happening.”

Bryan said she remained calm and that nothing was damaged except for textbooks and cardboard boxes holding some of her possessions.

“I never freaked out but on the inside I was screaming,” Bryan said.

From there, maintenance was called to resolve the issue.

Associate Director of Maintenance Michael Knight said that when maintenance arrived at 5 p.m. water came flowing out of the door. By 6 p.m., maintenance was able to get majority of the water up and left a dehumidifier to finish the job.

Bryan said that she will be staying in a vacant room down the hall until her room has been cleared as ready to use again.

“I heard that it’s only supposed to be two to three days, maybe up until Monday that I’ll be staying there,” Bryan said.

Director of Housing Dr. Zduy Chu came to help Bryan remove dry things from her room to a temporary storage space. Hailey said that the housing department will be reimbursing her for any water-damaged items.

According to Spain, Servpro will have the Blazer Grille open for business by today at 5 p.m.

Previous What’s Your Take: Kaepernick’s imprint still in the NFL
Next SGA grows in quality and quantity