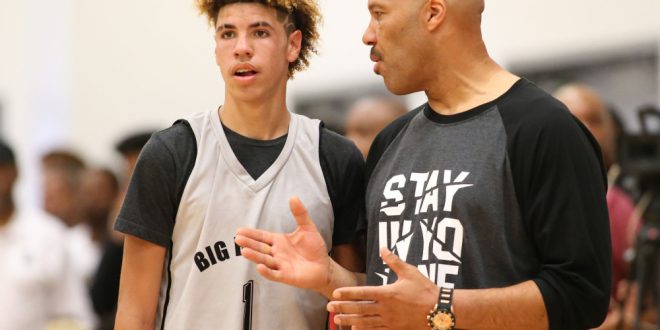 LaMelo Ball is the youngest of the Ball trio. He had planned to attend UCLA like his older brothers, Lonzo and LiAngelo. Now, that plan may have to change.

On August 31, LaVar Ball and the Big Baller Brand released the “MeloBall 1.” The shoe is inspired and designed by LaMelo Ball, the 16-year old basketball prodigy from Chino Hills, California. Why is this amazing? He becomes the first high school player ever to have his own signature shoe.

Previously, the brand released the first professional model, the ZO2, which comes in at a $495 price tag. The shoe is named after LaMelo’s oldest brother Lonzo.

However, the Big Baller Brand faces an issue with its latest product. Thom Simmons, assistant commissioner of the California Interscholastic Federation Southern Section, told TMZ Sports that, “Ball’s shoe would not impact his high school eligibility,” but it will affect his eligibility at UCLA.

Yahoo Sports’ Jeff Eisenberg, citing NCAA bylaws said, athletes are prohibited from “using their name or picture to advertise, recommend or promote directly the sale of a commercial product or service of any kind.”

LaMelo is currently ranked as the No. 7 player of the 2019 class, according to ESPN. Shockingly, he committed to UCLA at the age of 13. He follows in the footsteps of his two older brothers, Lonzo and LiAngelo. Lonzo played one season at UCLA before entering the NBA draft, and LiAngelo is entering his freshman year at the school.

My take is that LaMelo should not play at UCLA. He should skip college and play overseas, maybe somewhere in China. This will put him in an enormous shoe and basketball market. Another option would be to go to the NBA G-League for a year and then enter the NBA Draft.

Personally, I feel that Ball should not go to UCLA all together. His father’s goal is to have all of his sons playing in the NBA, preferably for the Los Angeles Lakers.

LaVar said, “We’ll worry about it when we get there. Who cares? If he can’t play, then he can’t play. It doesn’t mean he’ll stop working out and getting better.”

As of now, LaMelo’s eligibility is up in the air, and the NCAA is further trying to keep it there. The family should make a move now while this issue is being discussed. UCLA is also on the receiving end of the madness as well. If Ball becomes ineligible, the Bruins will be striped of the No. 7 player in the nation for 2019.

I can understand wanting to follow in the footsteps of your older brothers, but for business purposes, he should take on the two options of the NBA G-League or the Chinese Basketball Association. LaMelo is already a celebrity. Wherever he chooses to hone his skills, the fan base and media will surely follow.

If he chooses to play for China, from a business perspective, he can capitalize on the market and sell his “game changing” sneakers.

If he chooses to play in the NBA G-League, television networks will grab hold onto showcasing the games nationally.

LaMelo is in a win-win situation here. The family is strictly about changing the game of basketball forever, on and off the court.

The NCAA is not holding him back from changing the game off the court. If his shoes graze the hardwoods in China, the NCAA will regret not taking on the last Ball brother.